Citrus Valley High School’s Varsity Coach, Yon Okorodudu, or “Coach O” as he is known around campus, has been the Blackhawk’s varsity basketball coach since the school’s opening in 2009. He also teaches AVID and American government. The Blackhawks beat Temescal Canyon in overtime 49-48, leading them into the CIF Southern Section Division 3A quarterfinals, where they ended their season on Feb. 20 by just a 3-point loss to Murrieta Mesa in another close game.

Q: What was the mentality going into the basketball season?

A: The mentality going into the season was to continue to make improvements as a team. We were looking to finish at the top of the Citrus Belt League, make the playoffs and make a run in the playoffs.

Q: How prepared did you think the team was?

A: Our team was very prepared. Our players worked extremely hard in the summer and fall to prepare for the rigors of the season. In addition, several players participated in club basketball to further train and gain experience.

Q: Was the team’s performance this season surprising?

A: It was a pleasant surprise. Finishing as one of the top teams in the league and winning some games in the playoffs was a goal, but it was nothing we took for granted.

Q: What made the team different this year from past years?

A: Senior experience. We had six seniors in the programs who have been in the program for all four years. They were critical to establishing the culture and expectations the coaches had for the program.

Q: What did you focus on in improving during practice?

A: Our focus was defensive and offensive execution during practice. Our assistant coaches focused on these areas. It was extremely helpful since I felt our game preparation was very good this year.

Q: What would you like to accomplish next year?

A: We lost a lot of seniors this year. Next year will involve a lot of teaching a preparation since we will have a very young but talented team.

Q: Are there any seniors that really shined this year? 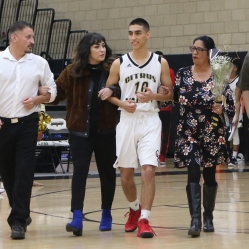 Q: What was it like making it the playoffs?
A: We had to finish in the top four teams to make the playoffs. It got down to the final game of the regular season against Redlands High School. If we win, we finish third, if we lost, we could have finished fifth and not made playoffs. Fortunately we won in a very close game and made the Quarterfinals of the California Interscholastic Federation championships.

Q: Can you share a particular memory that will stand out from this season?

A: Suffering a very emotional loss to RHS in the first round of CBL and coming back a few weeks later to beat them for the last game of the season.

Q: Is there anything else you would like to share or express regarding coaching Varsity Basketball at Citrus Valley?

A: It truly is a blessing on many levels. My son has been around the program his whole life, and now—as a freshman—was able to play Junior Varsity basketball in my program. We have such great character kids in our program. They were great mentors and big brothers not only to my son but to all the younger players in the program.

My Tweets
Join 438 other followers