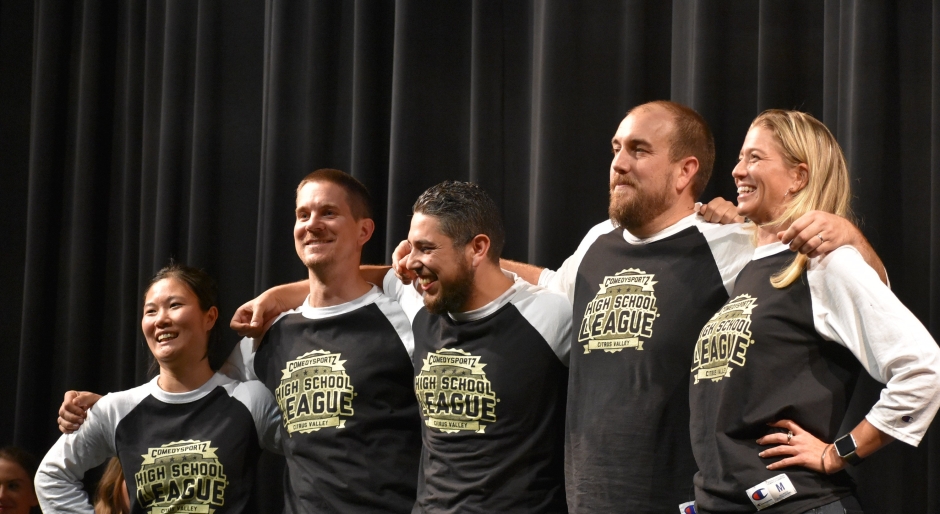 Another year, another Comedy Sportz teacher match. On Feb. 9, 2018, nine teachers put their improvisational skills to the test in Citrus Valley High School’s annual teacher match. The teacher match is the team’s biggest fundraiser, as many delighted students come and see their favorite teachers battle it out with the Comedy Sportz players for laughs. This year’s match was highly successful and was packed full of witty jokes and characterization from the beloved teachers. Of course, since Comedy Sportz is the theatre students’ athletic outlet, a highlight reel seemed to be the only fitting way to cover the hilarious night.

Scissors are the star of Dating Game: In a character game based on classic television dating show games, Spanish teacher Katheryn Fonken stole the show as a pair of scissors. Fonken went the entire game consistently creating a scissor-like movement with her arms and made a couple of very clever blade puns to help English teacher Jennifer Moon figure out what she was.

Teachers close out the first half strong: In the final game of the first half, Expert Challenge, both the students and teachers played head-to-head to decide which team had the most knowledge on various subjects, all evolving throughout the game. Advanced Placement Government and Politics teacher Ken Carpenter was the most eager onstage, coming to the playing field substantially more than the other so-called experts. The most significant part of the game was actually a stab from teacher to student by Moon to senior Sarah Wilson. While Wilson was explaining her experiences in academics, she made a minor English error. Moon shot up and urgently exclaimed, “This is why you didn’t pass last year!” which ended the game and half on a huge laugh with teachers in the lead 17 to five.

An empowered staff member graces the stage: Campus security guard, Officer Matt, was suggested to be “empowered” during the teachers’ first team game of the match, Emotional Symphony. As the guest referee, Taylor, pointed at him to express his emotions, he spouted out confident remarks like “I am the greatest person alive” in an inspirational tone. The audience was thoroughly entertained and engaged with his empowering remarks.

A sudden-death tie breaker sets the fate of the teachers. At the tail end of the match, it was revealed that the students and teachers were tied in points with 26-26. A final pun was to be made by both teams, and, being the ironically funny players they are, senior Matt Klimper and Officer Matt faced off in a Matt versus Matt battle. The audience suggestion for the final pun was “mortician.” After a quick team consultation, the students made their pun first. Klimper made a witty reference to The Addams Family as a play on the word suggested. When Officer Matt stepped into the playing field, tensions rose throughout the theatre. The audience held their breath as he began his joke set up, “185 morticians walk into a bar. The bartender says, ‘sorry, we don’t serve morticians here’ to which the morticians reply, ‘Ah, it’s DEAD in here anyways!” With that final joke, the teachers began their celebration, as it was an automatic win due to the audience’s screaming reaction. The teachers took the victory 27 to 26 and remain the comedy kings and queens of Citrus Valley.