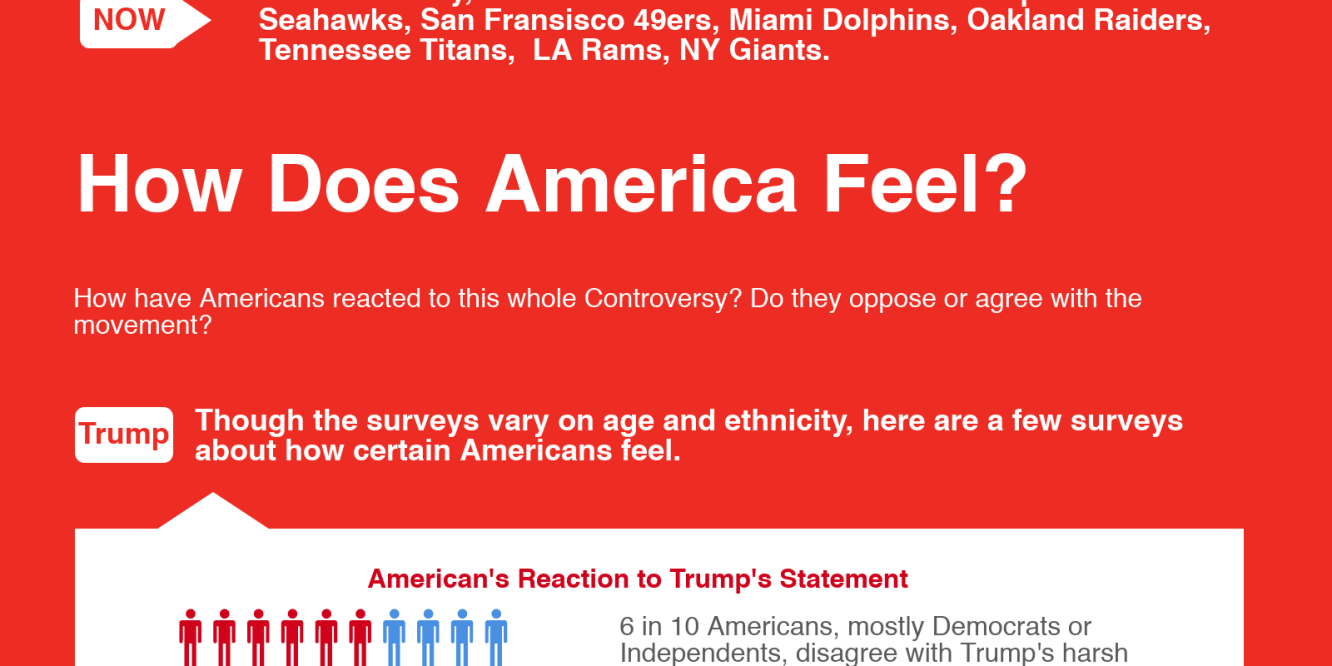 On Aug. 14, 2016, NFL quarterback for the San Francisco 49ers Colin Kaepernick first sat through the national anthem before the first preseason game. Despite this, he did not receive media attention until Aug. 26 during the third preseason game since he was actually dressed out and played the game.

Initially unnoticed, his protest was quickly brought to light after Jennifer Lee Chan of Niners Nation tweeted out a photo that showed him kneeling. With media attention then swarming around Kaepernick, the 49ers released a statement confirming that Kaepernick did, in fact, take a knee throughout the anthem. When asked about his decision to take a knee, he said that he was “not going to stand up to show pride in a flag for a country that oppresses black people and people of color.” Regardless of reason, he faced immediate backlash from a large portion of the nation.

As the debate grew, on Aug. 28, Kaepernick expanded on his statement, making it clear that the protest was a way to give a voice to those who do not share the same platform he does. In an interview with NFL.com, Kaepernick said that he felt there is not a significant push for change in the nation. Kaepernick also wanted to make it clear that he has “great respect for the men and women that have fought for this country.”

Despite this, many view his actions as extremely disrespectful. Not a single team signed Kaepernick this season, as many coaches view him as politically divisive, unbeneficial for the franchise and unfocused on football, which they believe has led to his decline in performance over the past two years. It is also speculated that coaches worry that Kaepernick is a liability, especially since he expects to be paid a starting players wage despite his statistics forcing him to come of the bench such as the increase in interceptions causing more turnovers per game and his decrease in both rushing and passing touchdowns. Despite this improvement, franchises will not sign Kaepernick because they worry about losing money due to fans boycotting games in protest.

The controversy’s impact is still relevant a year later, leading to President Trump’s comments on the league on Sept. 23, 2017. “Wouldn’t you love to see one of these NFL owners,” he said, “when somebody disrespects our flag, to say ‘get that son of a b**** off the field right now – he’s fired.'” While some did support Trump’s statement, he faced resistance from athletes and celebrities alike over social media.

Trump’s proposal might violate the First Amendment if action was taken, but it is not without precedent: the NBA has a rule in place that mandates the conduct of their players before games. This rule was instituted after Denver Nuggets guard Mahmoud Abdul-Rauf refused to stand for the anthem in 1996. According to this precept, NBA players are supposed to be dressed out and all must stand for the anthem with their team. It even dictates that coaches must be dressed in at least a sports coat as a sense of formality.

Much of the NFL came together in protest of President Trump’s statement. On Sunday, Oct. 1, many players from the Buffalo Bills, Indianapolis Colts and New England Patriots either kneeled or linked arms together in solidarity. The entire Cowboys team including their owner kneeled, the New Orleans Saints remained on the bench, and neither team in the Seattle Seahawks game against the Tennessee Titans left the locker room during the anthem. No matter how many protested, the players were still supported by their team, and 18 of the 32 teams in the NFL participated in the protest. This led to the trending hashtag “#TakeAKnee.” This was in response to Trump’s crude comments which many athletes disagreed with, so players from those teams decided to take a knee in support of Kaepernick’s message.

Following the protest, there have been heavy debates on the issue and it is yet to be determined what actions either the league of the NFL will take place in response. Fans boycott games in some states. Despite Kaepernick’s expression of what kneeling during anthem meant to him, Fox News contributor Tami Lahren expressed during one of her final thoughts, “What exactly are you kneeling for, and why, exactly, have you chosen the flag and the anthem to do it? I bet if we asked 100 players, we’d get 100 different answers,” she explained. “And I would like to ask those same players, What would it take for you to then stand and respect the flag and the anthem,’ and again, you’d probably get 100 different answers.” Tomi continued to be very vocal over twitter  and her show believing that what Kaepernick and other players done was extremely disrespectful to the United States flag and military and that their movement had no merit based on her beliefs.

In an interview with ABC News, Lebron James expressed support for his colleagues in the NFL: “It’s not about the disrespect of our flag and the military that’s made this world free.” Lebron and other athletes and celebrities continued to defend the movement despite the uproar on the issue. Specifically, on Sept. 23, John Legend responded to Trump’s call for owners to fire players who kneel by tweeting, “The White House is again urging the firing of people who exercise free speech to fight for equality and justice. Shameful.” These divisions steadily became clear amongst Americans as seen in a survey conducted by the Cato Institute showing that 61 percent of Americans oppose NFL players being “fired” for not standing for the national anthem to make a political statement, while only 38 percent agree with President Trump’s statements on Sept. 22.

The statistical spread was evaluated based on age, race and political affiliation. According to the study, all age groups, except for 65 and older, are opposed to the firing of players for kneeling, with the age group of 18 to 29 being the most against with a 71-percent-to-28-percent spread. Racially, it was seen that 55 percent of white Americans, 88 percent of African-Americans and 60 percent of Hispanics opposed President Trump’s statement. 64 percent of Independents and 80 percent of Democrats also opposed the statement, while 65 percent of Republicans favored his words. This data showed a vast difference in opinion across every group, with any remainders in percent having been indifferent.

On Oct. 15, Kaepernick would later proceed to reportedly file a lawsuit against NFL team owners for collusion as the reason he still did not receive employment by a team. Kaepernick’s attorney would later say in a statement recorded by The Guardian that “If the NFL (as well as all professional sports teams) is to remain a meritocracy, then principled and peaceful protest – which the owners themselves made great theater imitating weeks ago – should not be punished and athletes should not be denied employment based on partisan political provocation by the Executive Branch of our government,Such a precedent threatens all patriotic Americans and harkens back to our darkest days as a nation. Protecting all athletes from such collusive conduct is what compelled Mr. Kaepernick to file his grievance”

Amidst the argument, the NFL Players Association remained quiet even with the possibility of Kaepernick winning the case.  After media attention began to swarm around his lawsuit, the association later said that it would support Kaepernick. While there are questions as to the amount of evidence supporting collusion or blackballing done by owners of teams of the NFL, proceedings began on the first week of January and details regarding the case has since been kept quiet.

Going into the 2018 offseason, it will be seen if Kaepernick not only wins his case but if he also joins a team. The Packers and Texans may be possible teams due to injuries to their starting quarterbacks during the 2017 to 2018 season. If Kaepernick is signed, it does not prevent him from winning his case because he could make a clear argument that he was victimized previously.