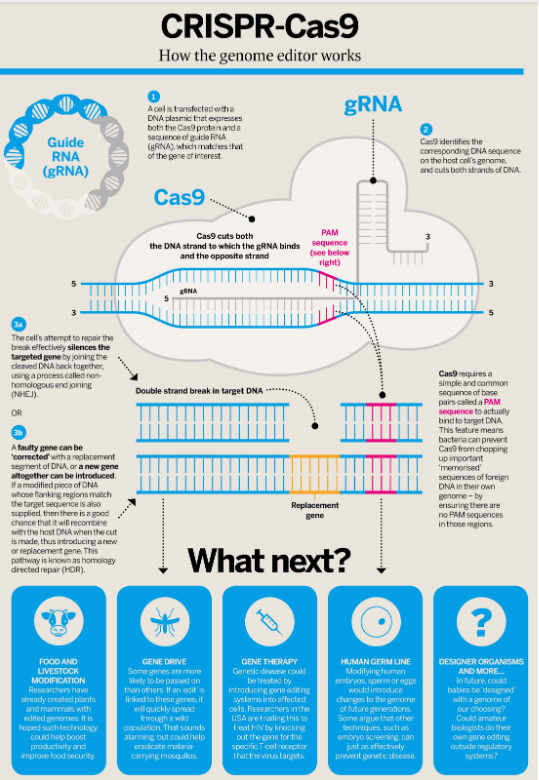 According to Stacy Richardson, a seasoned journalist with 15 years of experience who writes for the Great Lakes Ledger, Crispr- Cas9 is a tool that lets scientists make precise cuts in human DNA. Cas9 is often referred to as “molecular scissors” that can travel along a strip of DNA and make an “array of deletions.”

John Loeffler, a graduate from City University of New York-Brooklyn College who writes for Interesting Engineering, addressed how Cas9 does not compare to the newest CRISPR addition of Cas3. Cas3 is also called the “molecular shredder” because it can shred underlying material along an entire length of DNA.

Both Cas9 and Cas3 are borrowed from bacteria, but Cas3 uses a more common CRISPR called type I, while Cas9 uses type II CRISPR. Type I has never been used in any eukaryotic cells before, but it has totally revolutionized the way DNA will now be altered.

With the new discovery of Cas3, it is up to scientists to use the technology to alter and experiment with long stretches of DNA. Krishna Ramanujan, a writer for the Cornell Chronicle at Cornell University, says Cas3 can efficiently erase long stretches of DNA from a targeted site in the human genome, which was not previously possible with older Cas9 systems.

Cas3 can also be used to screen non-coding genetic elements and erase long sequences of DNA. Once the DNA is erased, scientists can investigate what functions are missing in the organism and use this information to recode the DNA and solve genetic diseases and disorders in the future.

According to Abigail Sawyer, a digital editor at BioTechniques, some challenges were faced, like how to make the human stem cell show changes after altering. Sawyer also stated the team working on Cas3 believes it is less likely to produce off-target effects than Cas9 due to a longer guide RNA sequence.

CRISPR technology has completely changed the altering of DNA, and its new use of Cas3 has the potential to open up many more opportunities for new discovery in the alteration of human cells.