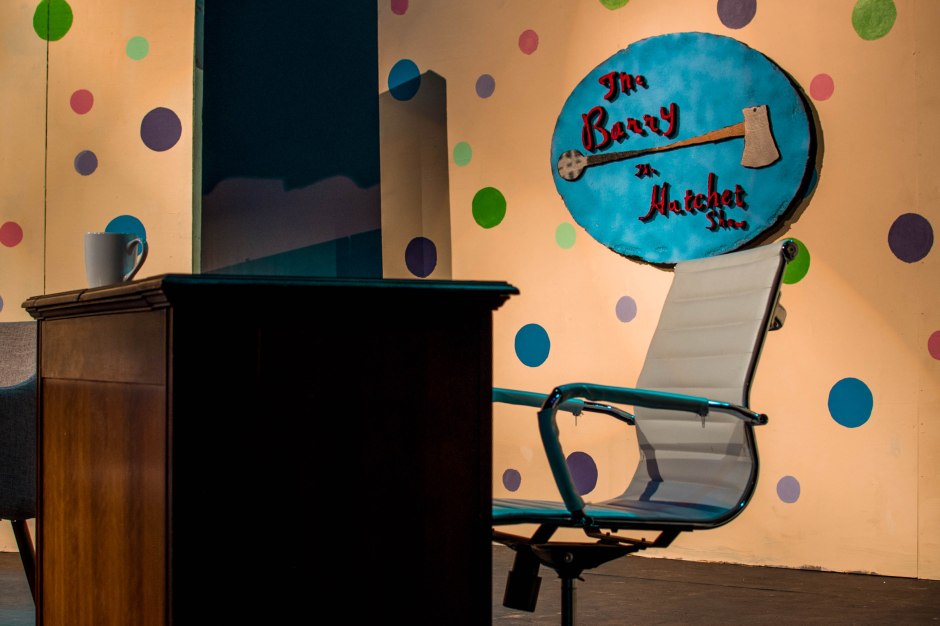 Citrus Valley’s Blackhawk Theatre Company recently put on the student-directed and interactive play of “The Fatal Fifties Affair.” The opening day was Nov. 7 at 4 p.m. and took the stage again on the 9,14 and 15. The play itself directed the audience be sorted into specific colors and seated accordingly on the stage. The cast was made up of seven students who portrayed a television family and two hosts. Jared Cotrufo, a senior at Citrus Valley, directed this play along side fellow senior, Stephanie Smith. Kaitlyn Hunton, who played the character of Winky, stated that the show “was fun and people who worked on it were kind and encouraging.”

The play opens with the introduction of the show’s host, Barry West, played by senior Jeamil Haboud. Barry then brings out the cast of the hit 50’s show: Make Way for Winky! The first hour of the performance follows the cast as they discuss their lives after the show, reasons for returning and the book that Aunt Cora—played by junior Allison Johnson—was writing about her life on set. After the cast leaves for a commercial break, there is a brief costume contest among the audience members. In first place is senior Amber Neuschler, who is then suddenly afflicted by a coughing bout, prompting the host, Barry, to give her a cup of water. A cup of water that only causes her coughing to worsen until she can’t breathe—and then it revealed that it was cyanide in her cup. When the cast runs back onstage to discover the murder, Aunt Cora appears to be missing until she too comes running in—but with a knife in her chest. And so the investigation begins.

The host, Olivia Rivera, announced to the crowd that the next hour will be split up into 30 minute intervals where, in the first half, the three color groups were able to look for clues. Each group got a packet based on the different characters and each packet had different activities to lead the group to the clues. During the investigation, audience members were able to engage each character to ask questions and see camera footage of the characters backstage during the incident. The hunt for the killer took the groups to the tech room, outside where the deceased was killed and even in the prop room.

In the second half, the initial group enjoyed apple cobbler made by Citrus Valley’s Foods class and some hot chocolate while the other group went on to explore and gain clues. When everyone resettled in their seats the show began again, unraveling the clues and revealing the true killer.  The play is an overall enthralling and enjoyable experience for the audience and cast members alike. Max Herzog, who played the father, said “I had a great time getting to improv with my peers, and it was an extremely fun and great learning experience as a cast.”