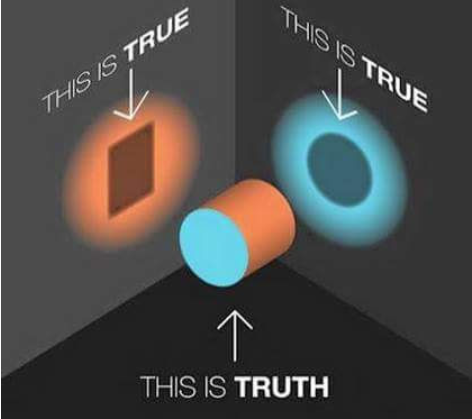 In today’s modern world, where information is transmitted rapidly through social media and online news sites, the concept of what truth is has a stable definition.  According to the Merriam-Webster dictionary, the truth is defined as “the body of real things, events, and facts.” In essence, the concept of truth is that it aligns with the reality and facts of a particular situation; if the facts accurately portray that situation, then it is true.

However, what if the facts are corrupted and the reality of the situation is not portrayed?  A simple answer to this quagmire would be that the truth is not being portrayed. Although that statement is true from an outside perspective, what if these corrupted facts and the twisted reality that is portrayed are the only things known about the situation?  If this is the case, then to that particular person the lie becomes the truth.

This is best modeled by Julius Caesar’s “The Gallic War,” in which Caesar details his conquest of what is now known as France, Switzerland, and Belgium.  In his accounts, Caesar details all the cultures he encounters in the region of Gaul and primarily portrays them as barbaric by Roman standards. Unfortunately, the Gallic tribes had no writing system and had their history memorized orally by their religious leaders known as the Druids.  Because of this, Caesar’s account, which displays heavy Roman bias, is the only recording of this war.

Today, many who study Caesar’s “The Gallic War” know that his accounts were designed to justify the many battles waged against the Gallic tribes and generate more popularity among the populace of Rome for himself.  However, to the Romans of Caesar’s day, the lies present in his accounts were completely true to them, as there were no other facts to refute his account. Thus, the lies were substituted for the truth and became the truth.

From this rather ancient example, one can gather how different versions of the truth can be created.  If all other facts about a particular situation are lost, then the ones remaining instantly become the truth, as they are the only reality that people have of what happened.  This idea is present in a variety of books of literary merit, including George Orwell’s “1984.”

In Orwell’s novel, the Ministry of Truth, a branch of the totalitarian government reigning at the time of the story, is dedicated to rewriting history to suit the political needs of the Party.  What’s more, the Ministry of Truth burns all accounts of any past facts that might portray a different reality than what they are putting out to the public. In this way, the Party hopes to re-shape reality, for if all the facts portraying one reality are destroyed then whatever replaces them becomes the new reality.

The ideas present in Orwell’s novel are a real danger.  If someone was able to destroy all accounts of the past and create a new one, they could shape reality to their purpose.  When no facts are available to refute the ones created, people will have no choice but to accept a false reality. For what is reality but what we perceive, and is not what we perceive information, and cannot information be made subjective at the will of a person?  It is of the utmost importance to remember that truth by its nature is subjective rather than objective, as the information that surrounds us is prone to be misrepresented out of accident or purpose.

One Reply to “Thinking Deeply: Subjectivity can corrupt the truth”