Civil rights activist, co-founder of the United Farm Workers Association and mother to 11 children, Dolores Clara Fernandez Huerta continues to be an inspiration for many. At age 87, the woman who created the “Si, se puede” slogan continues to work on behalf of people’s rights through her Dolores Huerta Foundation. 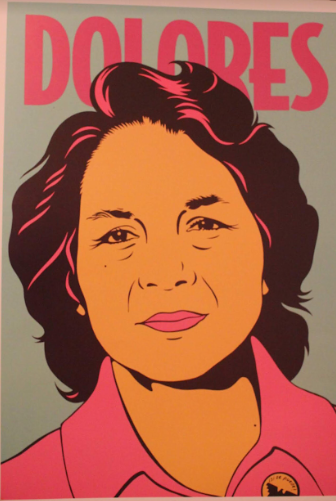 Poster print of Dolores Huerta designed by friend and fellow activist, Barbara Carrasco, was for sale after the screening and Q&A for $20. Proceeds go to the non-profit Dolores Huerta Foundation. (MIA ARANDA/ Ethic photo)

The University of Redlands Memorial Chapel was crowded with people from the Redlands community waiting to see Dolores Huerta on Wednesday, Sept. 19, 2018. University of Redlands students, including some from the office of Campus Diversity and Inclusion, reminded people walking into the building that those as young as 16 could begin registering to vote there. The evening, starting at 7 p.m., consisted of a screening of her documentary, titled “Dolores,” followed by a question and answer session by Huerta herself.

Dolores Huerta (right) during a Q&A session with her daughter (left) at the University of Redlands Memorial Chapel on Wednesday, Sept. 19, 2018. (MIA ARANDA/ Ethic photo)

Directed by Peter Bratt, her 96-minute documentary presents the struggles Huerta endured helping Cesar Chavez co-found the United Farm Workers Association while raising 11 children. The UFW was founded in 1962 and is now the largest farm worker union in the United States.

According to the documentary, the UFW worked tirelessly trying to better the lives of farm workers who had to tolerate horrendous conditions, such as often times having no breaks as well as being sprayed by pesticides, which affected their health. The documentary also showed farm workers being battered by the police while they were attempting to protest nonviolently.

The documentary not only covers her contribution to the UFW, but also shows her efforts up to today. After Huerta was injured at a San Francisco protest by the police in 1988, her 11 children showed up immediately to the hospital to care for their mother. In addition, they made sure someone was with her 24 hours a day despite the times when Huerta wasn’t able to be there for her children.

After the documentary ended, there was a loud round of applause from the audience as Huerta made her way onto the stage along with one of her daughters. A microphone stood on the opposite side of the stage where Huerta was seated, where people from the audience could come up to ask a question. People of all ages, from high school aged students to people who lived through the 1960s, expressed their pride in meeting Huerta by asking for her advice and perspective on different events.

At one point, Huerta mentioned that a lot of people had asked her what she would say to President Donald Trump to which she responded, “Get an education!”

Huerta also emphasized how important it is to vote, such as in the 2018 midterm elections on Tuesday, Nov. 6. She reminded the audience that, “We can march and we can protest and we can boycott but at the end of the day the people who hold public office, the people are elected, are the ones that make the policies that govern our daily lives.”

After the question and answer session, there was a long line as people purchased merchandise, like t-shirts, pins, posters, and DVDs of the documentary.

Before the evening concluded, Huerta had the audience chant “Si, se puede,” translating to “Yes, we can.”