News publication for high schools of Redlands Unified School District and the community. 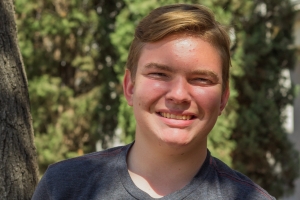 Spencer Moore is a staff writer for Ethic News. He is a sophomore attending Redlands East Valley High School. At REV, he is an active member of Speech and Debate and Ethic News. He joined Ethic News to keep people informed and educated and highlight the positive news […] 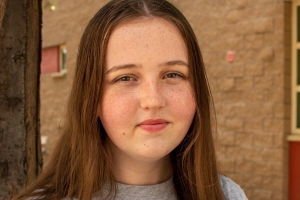 Elizabeth Molloy is a 13-year-old freshman attending Citrus Valley High School and is a staff writer for Ethic. Molloy joined journalism because she thought it would be fun and she enjoys writing. In her free time, she enjoys embroidering. She has self-taught herself; her favorite thing to embroider […]

Emmitt Murphy is a 14-year-old freshman at Citrus Valley High School and is excited to start his first year of being a part of Ethic News staff. Murphy’s interest in writing sparked his desire to join and learn journalism. His passion for writing has been growing since he […]

Ava Larson is a sophomore at Redlands East Valley High School. With a spirit of adventure and  a funny sense of humor, Larson joins the team of student journalists as a first-year staff writer for Ethic. In addition to being a journalist, Larson is an active skater. In […]

Nathan Dennis is a 17-year-old senior at Redlands East Valley High School and the oldest of four. He enjoys Star Wars, his dog Zoey, working out and writing stories; he intends on pursuing a career in writing books. Although this is his first year of digital journalism, Dennis […]

Hosted by AILEEN JANEE CORPUS, DANIELA MORA, CYRUS ENGELSMAN Today’s episode is a part of a three part series that is all about the Redlands East Valley Wildcats’ girls’ athletic director, Rhonda Fouch (she/her) who also goes by Fouch and Coach Fouch. Mrs. Fouch has been working on […]

Opinion: Wearing and trading social movements like fast fashion hurts the cause

By EMMA MILLER As new and old movements are spreading all across America, it may seem hard to keep track. One helpful way to encourage and uplift these movements is by speaking about them and listening to their voices. Genuine support is not easy; it takes both time […]

By SPENCER MOORE Distance learning is a struggle for many parties involved. Whether it’s distracting surroundings, intense workloads, or technical difficulties, parents, students, and teachers all agree that it is not the optimal way to learn and develop interests and skills. While the focus of struggles is often […]

Opinion: Responsibility of grades falls on students, not teachers — even in a pandemic

By ERICA BAUER Despite the Redlands Unified School Board’s decision to freeze grades as of April 19, as distance learning continues, one thing is on student’s and teacher’s minds alike: grading. With a widespread pandemic taking the world by storm, most outside of the educational system are shocked […]

Uncomfy Questions podcast: Why is the ‘fox-eye’ make-up trend offensive? 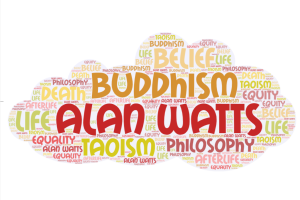 A mental health moment: Alan Watts’ views give a new meaning to life

Editor’s column: A mental health moment Emerson Sutow is the A&E Editor at Ethic News By EMERSON SUTOW Alan Watts was one of the first european philosophers to integrate buddhist and taoist beliefs into his teachings. He focused on the concepts of life and death, self worth and […] 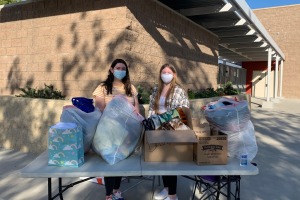 By EMILY PRINSTEIN With students remaining in distance learning, clubs have been facing many challenges. However, one club at Citrus Valley High School, the Compact Club, is still making an effort to get members and the local community involved.  The club has organized a community service project called […]

The COVID-19 Vaccine and how it may affect you

By EMILY PRINSTEIN After a little over a year of the coronavirus pandemic terrifying people all around the world the vaccine has now become available to the general population. According to the Centers for Disease Control and Prevention, there have been over 106 million COVID-19 cases in the […]

Originally published in La Plaza Press By ISAAC MEJIA, ALISSON BERMUDEZ and ARIANA GHALAMBOR Since school switched from in-person to online learning last March, the Redlands East Valley High School campus has undergone many changes that have affected students returning to in-person learning this year. Some of these […] 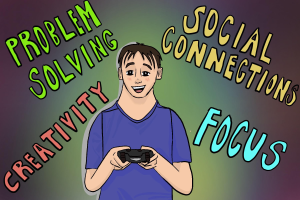 The good and the bad video games bring out

By JASMINE ROSALES Growing up in this generation is very different than it used to be. Most parents say they spent their time outside playing rather than being inside with a screen in their face. Many adults say that video games are bad for children for different reasons, […]

Originally published in La Plaza Press By CYRUS ENGELSMAN Due to the school year being held virtually, many extracurricular activities have had to adapt and change drastically. Theatre had one of the biggest changes, because no plays have been able to be performed this year.   This has not […]

Originally published in La Plaza Press By CYRUS ENGELSMAN Distance learning has been a struggle for many students of the Redlands Unified School District. However, this unprecedented year has not extinguished them from learning new hobbies, and spending quality time with pets and family. This collection of photos […]

Video: Back on campus

Originally published in La Plaza Press By MIA ARANDA (MIA ARANDA/ La Plaza video) After a prolonged period of time that students were adapting to distance learning, April 19 marked the day that high school students in the Redlands Unified School District were able to return to school […]

Garner Holt brings imagination to life through animatronics and robotics

By KENDRA BURDICK Garner Holt has set up a virtual walk-through of their studio in Redlands, allowing people from all over to experience the field of animatronics and robotic entertainment. Holt produces designs that are considered to be world-class attractions, as they are used in shows and exhibits […]

Despite new hybrid schedule, some students are opting-out of in-person school

By LILIAN MOHR With the return from spring break, the question of what the last quarter of school will look like for Redlands Unified School District schools remains.  Although neighboring districts and schools across the country have already returned to either hybrid or even in-person learning, RUSD has […] 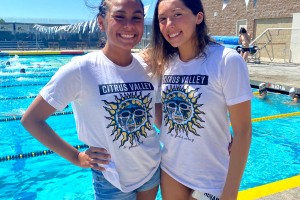 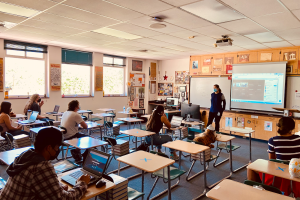 By MAURICIO PLIEGO Within the last days of March, the Redlands Unified School District decided to open the school sites for the students through a vote made by the Board of Education. They opened and gave the choice to the parents to allow their students to stay at […] 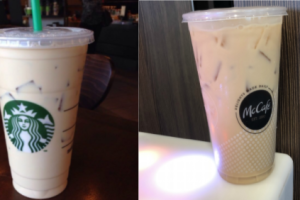 By NYLA DE CARALHO To say that people enjoy coffee could be an understatement. Most people actually have an obsession with coffee to the point that they could be moody without it. WebMD states many adults or teens claim to have an addiction to coffee and, according to […]

Uncomfy Questions podcast: What is it like being surrounded by people who do not look like you?

WARNING: We’ll be talking about sexual assault. Listener discretion is advised. If you or a loved one is suffering because of sexual assault, please do not be afraid to ask for help. The National Sexual Assault Hotline is 1-800-656-4673. In today’s episode, Dani and AJ go over what […]

By JASMINE ROSALES After a long year of distance learning, school districts have given schools the thumbs up to return to school in-person. The Redlands Unified School District slowly started welcoming students back by grade level starting with elementary, then middle school and finally high school students. High […] 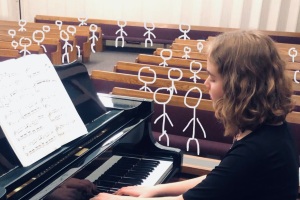 Column: Epiphanies in isolation-Relearning to love a hobby

Editor’s Column: Epiphanies in isolation Tatum Mapes is the Editor-in-Chief at Redlands East Valley for Ethic. By TATUM MAPES Pretty much everyone has a hobby: some extracurricular that gets them excited to get up and go somewhere. It’s where they find colleagues and friends who share their interests. […] 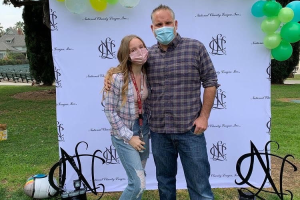 How girls are helping their community through the National Charity League

By MAKAYLA NAIME & ALLISON STOCKHAM The National Charity League is a multi-general philanthropic organization made up of mothers and daughters who volunteer to over 6,000 charities in the United States. Ranging from seventh through 12th grade, this organization is an amazing way for mothers to bond with […]

What you can expect returning back to school

By MIRIAM YORDANOS Starting April 19, Redlands Unified School District will be reopening the high schools to in-person instruction with new additions on campus and policies set in place.  According to the California Department of Public Health, all schools in red, orange, and yellow tiers counties can reopen […]

Citrus Valley announces sports will have a season

By JASMINE ROSALES, LILY SHAW & MIYAH SANBORN After the pandemic became worldwide, mandatory quarantine was announced to ensure the safety of others. This included schools and various businesses having to close down last year in March 2020. The school year was definitely cut short due to COVID-19 […]

Originally published in La Plaza Press By MIA ARANDA Redlands Unified School District Board Members approved a resolution on April 13 for high schools to freeze grades for the remainder of the school year. This resolution will be in effect starting April 19 when high schools transition to hybrid […]

WARNING: THERE WILL BE MENTIONS OF VIOLENCE IN TODAY’S EPISODE. The episode for this week will be a lot more serious than our past ones. We will be talking about a few events that have occurred due to hate towards the Asian American Pacific Islander community, and ways […]

Wildcat Beatriz Braga reflects on move from Brazil to California

By MIA ARANDA While many students spend the summer heading into their sophomore year completing homework for their first Advanced Placement class or simply relaxing after surviving their freshman year, Redlands East Valley High School junior Beatriz Braga was adjusting to California after moving from Campinas, Brazil in […]

Uncomfy Questions podcast: How can I submit questions? Can I be a guest speaker?

This first episode explains how to submit questions and apply to be a guest speaker. Available on Spotify, Google Podcasts, Breaker, PocketCasts, and RadioPublic. 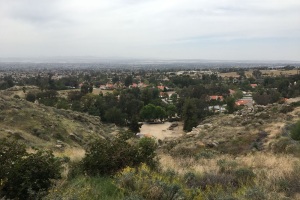 By DESTINY RAMOS MARIN The scientific definition of air pollution is the presence of substances in the atmosphere that are harmful to the health of humans and other living beings or cause damage to the climate or to materials, and it mostly happens because of humans. Air pollution […]

Understanding the complexities of Neurodiversity

By KENDRA BURDICK Neurodiversity refers to an alteration in the human brain regarding amiability, education, attention, mood and other mental functions. It presents a perspective that brain dissimilarity is special and shows downfalls and salvations. The term “neurodiverse” originated as a more compendious way to describe autism. Presently, […] 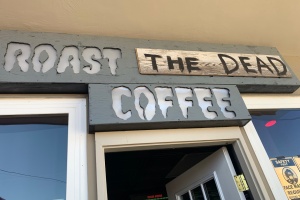 Originally published in La Plaza Press By DESTINY RAMOS MARIN Located at 12764 California St. in Yucaipa, this horror themed coffee shop is not something civilians would see in everyday life. The shop is based on the horror genre and multiple horror movies which makes it a very […]