Technology is developing and advancing rapidly throughout the world. Society has become more and more dependent on technology as it advances. Some restaurants have small robots that bring your food to you, other places are having them deliver packages. There has even been an increase in the development of human-like artificial intelligence.

Sophia the humanoid robot, engineered by the Hong Kong-based company Hanson robotics, was activated on February 14, 2016. For many years she was considered the most advanced humanoid robot in the world. However, at the recent Consumer Electronics Show (CSS) in February this year a new highly developed robot was “born;” her name is Ameca. Ameca was developed by a UK-based company known as Engineered Arts. 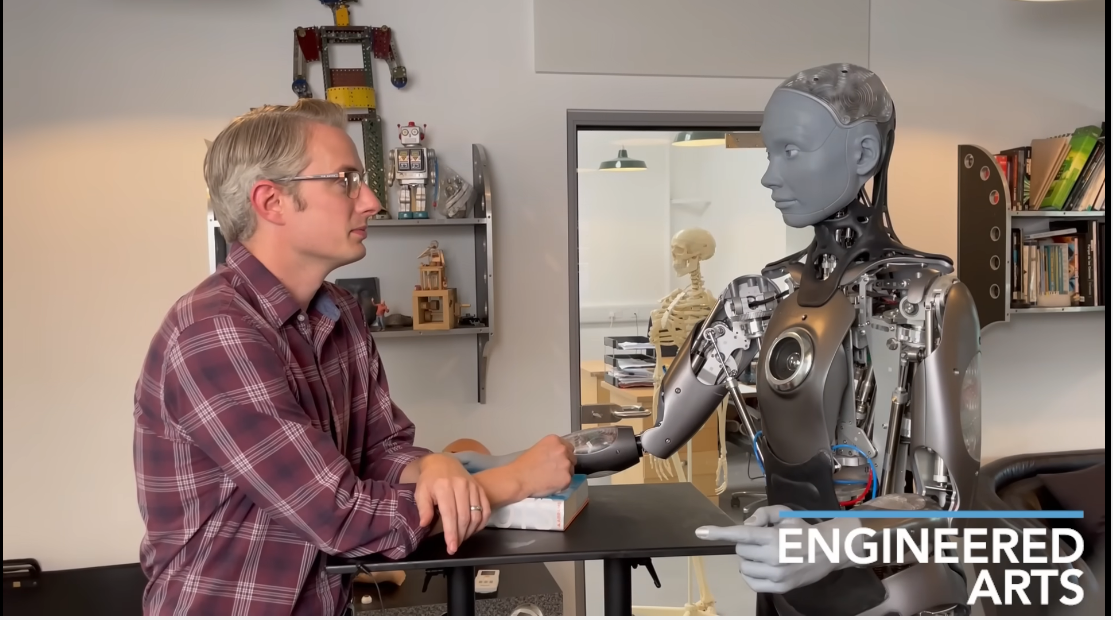 Ameca is meant as a tester for further advancing the capabilities of artificial intelligence, however, she is nonetheless extremely advanced. Her software is modular, meaning she can be easily upgraded, so much so that each module, or limb, can run independently. She is connected to her technological cloud that can be controlled from anywhere in the world. Not only that but she has advanced facial expressions so she can connect with anyone.

Unlike Hanson Robotics, Engineered Arts does state with confidence that Ameca is the most advanced humanoid robot in the world.

According to “Ameca: The Face of Future Robots” on Engineered Arts, “Ameca is the world’s most advanced human-shaped robot representing the forefront of human-robotics technology. Designed specifically as a platform for development into future robotics technologies, Ameca is the perfect humanoid robot platform for human-robot interaction. We focus on bringing you innovative technologies, which are reliable, modular, upgradeable, and easy to develop upon.”

Although there is still a discrepancy between whether Sophia or Ameca is the world’s most advanced humanoid robot, the companies that activated them have the same goal in mind. They hope to further advance artificial intelligence to develop a robot that is more human-like and intelligent than ever before.

Artificial intelligence has had significant developments in recent years, however, none of this would be possible without previous robots. Asimo the humanoid robot was created in 2000 by Honda and is currently displayed in the Miraikan museum in Tokyo, Japan.

Asimo was considered the world’s most advanced humanoid robot for a time. Unlike Ameca it does not have extremely advanced facial expressions but it is highly mobile. Asimo can run, climb stairs, and move the rest of its limbs with extreme ease. It has been displayed in several shows across the world and made its most recent and final appearance in March of this year. Honda has announced that it will be focusing on more advanced remote-controlled robotic technology.

Although Asimo is not considered artificially intelligent, it is still a highly mobile and advanced robot. The way that Sophia may not be able to answer extremely detailed questions but she is equipped with short answers in dozens of languages. Ameca as well may not be able to walk but the programming of her facial features is extremely advanced.

Each robot paved the way for the next to become extremely advanced and in some ways artificially intelligent. Every company that creates humanoid robots aims to improve after each launch in hopes to achieve full artificial intelligence. If this goal is ever reached, as it seems the world is already getting there, the impact on society as a whole will be tremendous.