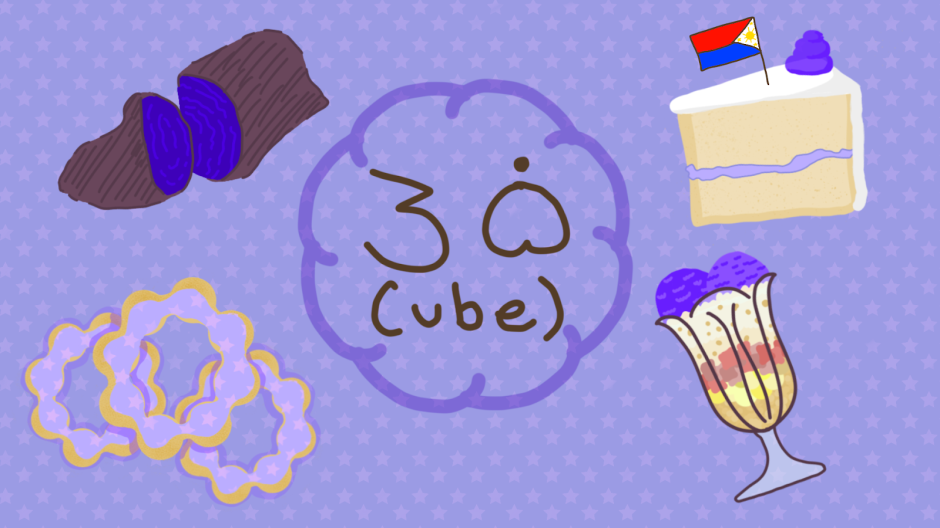 In that spirit and to make up for my shortcomings, I would like to address the purple yam that’s been rocking the world: ube (oo-bay).

Commonly used in Filipino desserts, ube is a root vegetable with a distinct royal purple color once cut open. One can find ube used in cakes, ice cream, milk tea, and plenty of other desserts.

Ube is also the Tagalog word for “tuber” which is exactly what ube is: “a short fleshy usually underground stem bearing minute scale leaves each of which bears a bud in its axil and is potentially able to produce a new plant” according to Merriam Webster’s Dictionary.

When I was a kid, if I had asked my friends what ube is, they most likely would have not known what it was, but times have changed and if one does not recognize the name ube, then they would most likely recognize the description of the sweet and nutty flavor of the beautiful purple root in drinks or cakes.

In the television series “Steven Universe,” the main characters have a Swiss rolled ube cake, and now, there are numerous YouTube videos on a recipe on how to create the same cake.

Similar to the yam and sweet potatoes, ube falls under this, but taro is often confused with ube. As seen in taro drinks at boba shops, the drink is purple, but it gets me thinking, “Taro is white on the inside while ube is purple. Why would the drink be purple?”

““[T] aro roots can be in different colors, such as pink, purple, and white. Depending on the region it is grown, the root color can change. However, mostly it has white flesh with small purple spots on it, which is not hard to notice,” according to BonTea Cafe’s , a tea and coffee shop in Los Angeles, “People who see the purple color of the taro bubble tea get confused. Sure, the plant is not purple, but the taro powder is. Manufacturers add food coloring to the powder while processing it. Therefore it has a catchy purple color.”

So that explains that mystery, and although it is a minor change in coloring that the food industry has done to numerous other foods, continuing to color taro powder as purple might mislead those who are unfamiliar with both starches that they are either the same color or are simply the same vegetable with a different name and/or color.

From its humble beginnings of being solely in Filipino dishes, ube has branched into the public eye. I am extremely proud of my heritage and culture, so the fact that a simple yet beautiful purple vegetable is becoming the center of attention truly brings a smile to my face.

I hope to see more lesser known produce and dishes become mainstream; representation means everything, but I’ll save that for another article.

One thought on “Column: Cuisine with Aileen – Ube-king me crazy”

My Tweets
Join 438 other followers