In eighth grade, the students in an honors science class were quietly finishing a water cycle worksheet as their ears catch the sound of a young man, watching a YouTube video on his phone. The piercing silence was perforated by this sudden blast of car noises, coming from the video the boy was watching. The teacher, frustrated by this mild act of defiance, grabs a chair nearby her desk, thrusts it above her head, and slams it onto the floor, creating a deafening roar. This was one of the first instances in which students suddenly realized that teachers needed to be held more accountable for their actions. From the perspective of the students in this classroom, this teacher received no consequence for their inappropriate behavior, and continued instruction the next day.

This event shaped much of the student body’s perception of this teacher. It was one of the first times in which students realized that as they get older, they must be treated as such, as with the increased responsibility of growing up, it also comes with a greater need for mutual respect. Across the district, many examples of teachers overstepping their boundaries have occurred either at the elementary, middle, or high schools. There are teachers who use their authority to silence discussions outside of what they believe to be true, not to mention the problematic power dynamics that exist in the intrapersonal relationships that the students have with their teachers. Any opinions shared by students are lambasted by these specific teachers, almost to the point of public mockery. While it is cruel and unhelpful to defame or otherwise degrade the character of these teachers on a public scale, this is illustrative of a greater trend at the Redlands Unified School District.

Currently, students have no official way to evaluate their courses, nor report teachers specifically for their inappropriate behavior. The only format for students to voice their concerns is through their assigned counselors, who have been known to, on numerous occasions, dismiss the concerns of the student and write it off as teenage angst and attitude.  It is crucially important, however, that the district establishes a secure line for students to evaluate their courses.

Not every poorly behaved teacher is acting in these extreme manners, though, as there are some who simply do not input grades regularly, give unstructured and unfocused lessons, and have personal issues that bleed into their teaching responsibilities. One major way for teachers to be evaluated is through standardized testing, whether it be at the district, state, or national level. This has its own problems though, as many students suffer from test anxiety, and others don’t pay attention to instruction, it is not fair for the quality of a teacher to be judged through the work their students complete.

Most major collegiate level institutions already have a system for evaluations of courses directly by the students, so why shouldn’t high schools? Many opponents of this idea have brought up the fact that college students are acting as customers of their school, but high school students are not, therefore they should not be permitted to review a service that they do not pay for. This equivalency is false as by federal law, all minors are required to receive some form of schooling. If they do not, the parents and/or legal guardians will be fined and in some extreme cases, the children are taken from their homes. If students are required to attend a school, would it not be more imperative that they are able to share their thoughts and concerns? Not all of these evaluations are needed for reasons as innocent as simply not doing their job very well, sometimes the behavior requires further measures to cease inappropriate personal conduct.

The SpriGeo system, buried under tabs and links on the district and school websites, has been recently put into place to address harassment concerns on campuses but it is not specifically designed for reporting of interactions and behaviors of teachers and other staff members. Many students feel that they still do not have a secure line to specifically address the issues that come up with campus staff.

The system further has problems lying in the fact that in the actual report filing program, it states that their grade should be listed, if known, and it suggests that students talk to an administrator, completely negating this premise of anonymity, not to mention how it asks for the person reporting the issue’s name. While optional, it may lead students to believe that the promise of anonymity is misleading. This ignorance of teacher harassment and misbehavior further isolates the student from putting a stop to the issue.

Teacher accountability is not limited to only the behavior that they exhibit in their instruction though, as it also extends to the personal relationships they share with students. RUSD has paid over 41 million dollars within the last five years in settlement money for sexual harrassment lawsuits alone. This number far exceeds any competing figures in other school districts. Unprofessional and off putting behavior could have been reported earlier, possibly even stopping some of these cases from ever occurring. If the school district decided to create and heavily publicize lines of help for these specific instances we would likely have a great deal fewer cases of this abuse. The SpriGeo system, while a step in the right direction, needs further improvement and clarification as to what types of reports it accepts.

The board of RUSD are elected to their offices by local citizens, to serve the adults of the community and their children, while providing the highest quality school environments they can, as it is crucial to the benefit of their education to give students a safe and secure place to learn. It is the campus staff and teacher’s job to keep their students safe and provide them with the highest possible level of quality in education, which also includes a good environment for students to work in. 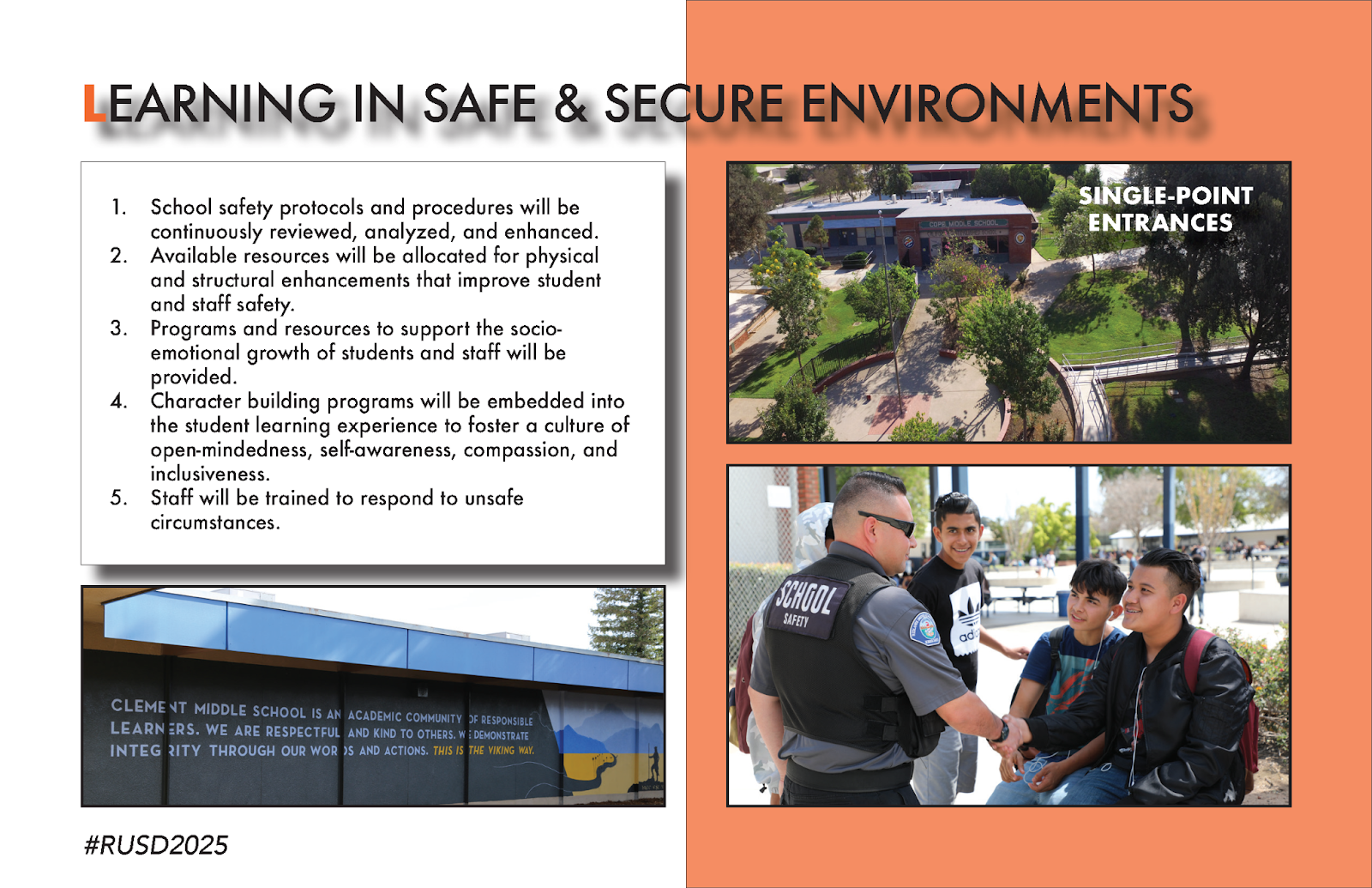 An image of the safety section of the RUSD 2025 plan. Other sections of this plan can be found at RUSD.net

The district pushes forward its ‘RUSD 2025’ plan, and while to the general populace, this is regarded as a step into the right direction, and even into the future, it makes very little substantive progress in regards to the safety of students. The 2025 plan does make mention of safety in Redlands schools, but frames every point made in regards to safety as an outside issue, as opposed to pointing the lens of misbehavior upon itself, which unfortunately is where most of the danger lies. Excellence in education may be the district slogan, but it certainly is not the district standard.