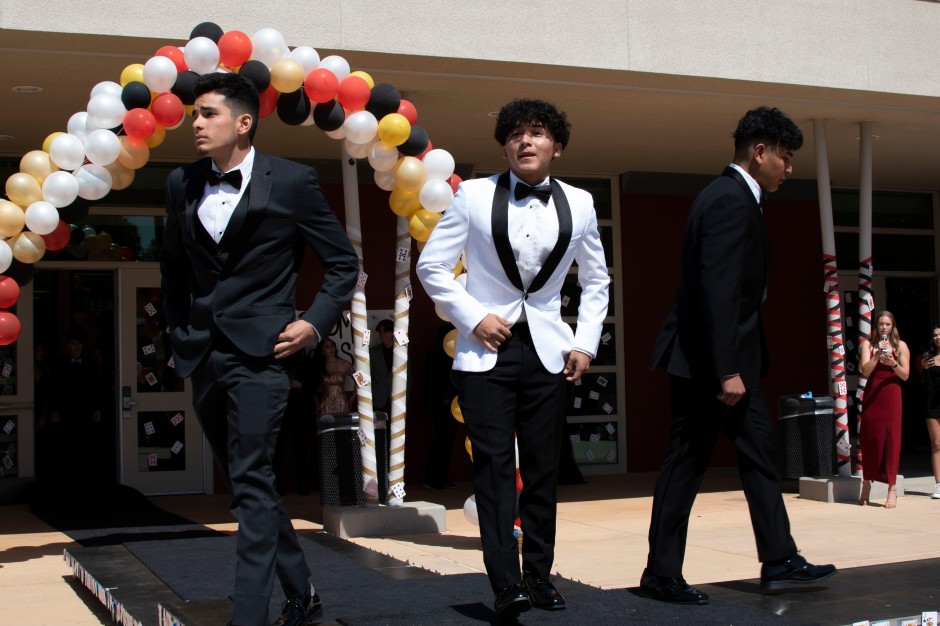 On March 18 2022, Citrus Valley High School’s Associative Student Body put on their annual prom fashion show; however this year there was a twist. At the show, all information including the prom theme, date, ticket prices, and location were released.

The theme is based off of the fictional story of Alice in Wonderland, specifically the characters the King and Queen of Hearts.

Prom is scheduled to take place at Desert Willow Golf Course from 7-11 p.m.

The fashion show itself contained seven groups, three couples and, a new addition to the show this year, four groups of three.

The show began at the beginning of lunch in front of the E-building with the masters of ceremonies Senior Pep commissioner  Elise Kollar and Junior President Sydney Hageali gathering students around the runway. From there the first couple, senior model Ariana Nelson and senior model Landon Campos, were announced.

After each couple or group made their way down the runway, they split at the end of the risers and each hit three poses. They then came back together and performed a handshake. Each handshake was unique, from twirls to dips to even money flying into the crowd.

Trio senior model Sierra Alexi, senior model Wendy Gonzalez, and senior model Luchiano Swidan utilized real money during their handshake as the three of them threw a combined total of $100 in fives into the crowd.

Alexi stated that, “I remember when we first threw money, it was unexpected because the whole crowd was just standing there stunned but then the realization and excitement kicked in and they started running to get the money.”

The stage itself was ornately decorated in the theme “Deck of Cards,” as all four styles of playing cards were used. The runway was lined with cards as well as a black carpet to match the color theme of black, white, red, and gold. Cards were scattered over the windows that provided the backdrop to the runway, as well as on the poles that hung over and next to the stage.

Balloons played a key factor in the show as three were placed on each side of the runway as well as a massive balloon arch in the theme colors that flew above the stage.

During the reveal of the theme, single bouquets of balloons were brought out to be given to the audience. Hand decorated crowns were also brought out with the balloons. On the crowns the theme name was front and center, and students were able to wear them for the remainder of the school day.

Steve Guiterrez, a senior that walked in the first ever boy trio, “They [Mens Wearhouse employees] treated us kindly even though it was completely sponsored by them, they treated us with respect and they made sure we were fitted and knew how to get dresses without their help.”