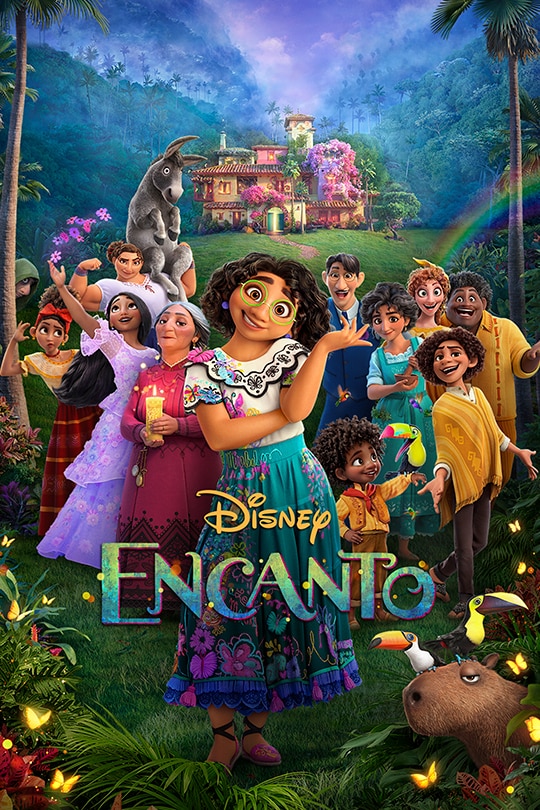 Disney’s “Encanto” is a fantasy film taking place in Colombia that was released on Nov. 21, 2021. “Encanto” tells the story of the Madrigals, an extraordinary family with magical gifts, and one Madrigal who wasn’t given a gift. The movie revolves around Mirabel, and what happens when she notices that the miracle, the reason that the family has gifts, is slowly beginning to die.

The showcase of Colombian culture was extremely successful through matters of appearances of not only the characters but their Encanto, their refuge, as well. Colombian culture is also showcased through other things such as the movie’s cast, music and colors.

The family’s Casita, their home, is set in an “Encanto” as the family called it, located in the Colombian mountains. Their home’s location ensures that the family will never be faced with the danger of an invasion that sent Abuela Alma and Abuelo Pedro fleeing from their home 50 years earlier. This invasion caused Pedro’s death and the birth of the family’s miracle.

Present-day, the family has grown with six children between Alma and Pedro’s triplets Julieta, Pepa and Bruno. The family was introduced during the first song of the movie, “The Family Madrigal” sung by Abuela’s fifth grandchild, Mirabel (Stephanie Beatriz).

In the song, she maps out their family of 12 and their powers. She explains the triplets Pepa (Carolina Guitan) whose moods affect the weather, Bruno (John Leguizamo) who can tell the future but who also disappeared and Julieta (Angie Cepeda) who can heal with food.

Pepa is married to Felix (Mauro Castillo) and has three children, Dolores (Adassa) who has super hearing, Camilo (Rhenzy Feliz) who can shapeshift, and Antonio (Ravi Cabot-Conyers) who is yet to get a gift later that night.

Julieta is married to Agustin (Wilmer Valderrma) and also have three children, Isabella (Diane Guerrero) who can grow flowers, Luisa (Jessica Darow) who has super-strength and Mirabel who is the only Madrigal child without a gift.

Much color and structure are showcased in the four-minute song. The colorful embroidery on the family’s clothing and within their hometown embodies the color used in cultural clothing in Colombia. Not only this, but the structural aspect of the town replicates actual towns within Colombian cities, big and small. Strong and bold colors that are used in the movie’s town are used within real Colombian cities such as Bogota.

The characters’ appearances are the most important aspect to the movie’s cultural background. The character’s skin tones, eye colors and hair textures vary. They show how different Colombians can look and prove that the idea of Hispanic alike is not only brown skin and brown eyes. Pepa is light-skinned and has green eyes, Julieta has brown-skin and dark brown eyes, and Bruno has darker skin and light brown eyes showing the varying looks, genetically, of Colombians and other Hispanics.

Along with the character appearances, the entire cast of the movie is one of the most diverse casts in a Disney movie. The casting was specific to each character, following a different cultural background than a typical Disney movie. Typically, Disney movies have characters of European descent, rather than those of Hispanic, black or native descent.

During Antonio’s gift ceremony, the whole town celebrates with the Madrigals and is not limited to just the relatives. The ceremony is an important aspect of Colombian culture. In every region of Colombia, any and all achievements are celebrated with big parties where it’s common for the family, big or small, to invite the entire village to celebrate with them.

After some time spent within the family’s Casita and at Antonio’s gift ceremony, the next song of the movie, “Waiting on a Miracle,” is presented by Mirabel. Though the song does not have any cultural aspect, it shows Mirabel in a vulnerable state which is important to the plot. She tells herself to not “feel regret or [sadness] at all” and explains that she is still “a part of the family Madrigal.” The song evokes pity among the audience for Mirabel, knowing now how she truly feels about not being “special” like the rest of her family.

The rest of the movie goes into more depth of the miracle and Bruno, but never gives a reason why Mirabel never received a gift. Fans of the movie have their theories, such as the thought that Mirabel would be the next candle holder after Abuela’s passing. Perhaps the answer will be given in future projects featuring the Madrigals.

The songs from the movie, written by Lin-Manuel Miranda, were huge successes on their part. Songs such as “We Don’t Talk About Bruno,” ”Surface Pressure,” and “The Family Madrigal” had hit and stayed on the Billboard Top 100 for almost a month, with “We Don’t Talk About Bruno” being number one for three weeks. Other songs in the movie included, “Dos Orugitas,” “What Else Can I Do?,” “All Of You,” and “Colombia, Mi Encanto.”

According to Rottontomatoes.com, the movie‒running at one hour and 39 minutes, has received a rotten tomato score of 91% and an audience score of 93%. It has made over 95.4 million dollars at the box office.

Overall, the movie succeeds in every cultural aspect that can fit into a 100-minute movie. If there are any future “Encanto” projects, fans are hoping to see an exploration of Colombian culture as well as other members of the family.