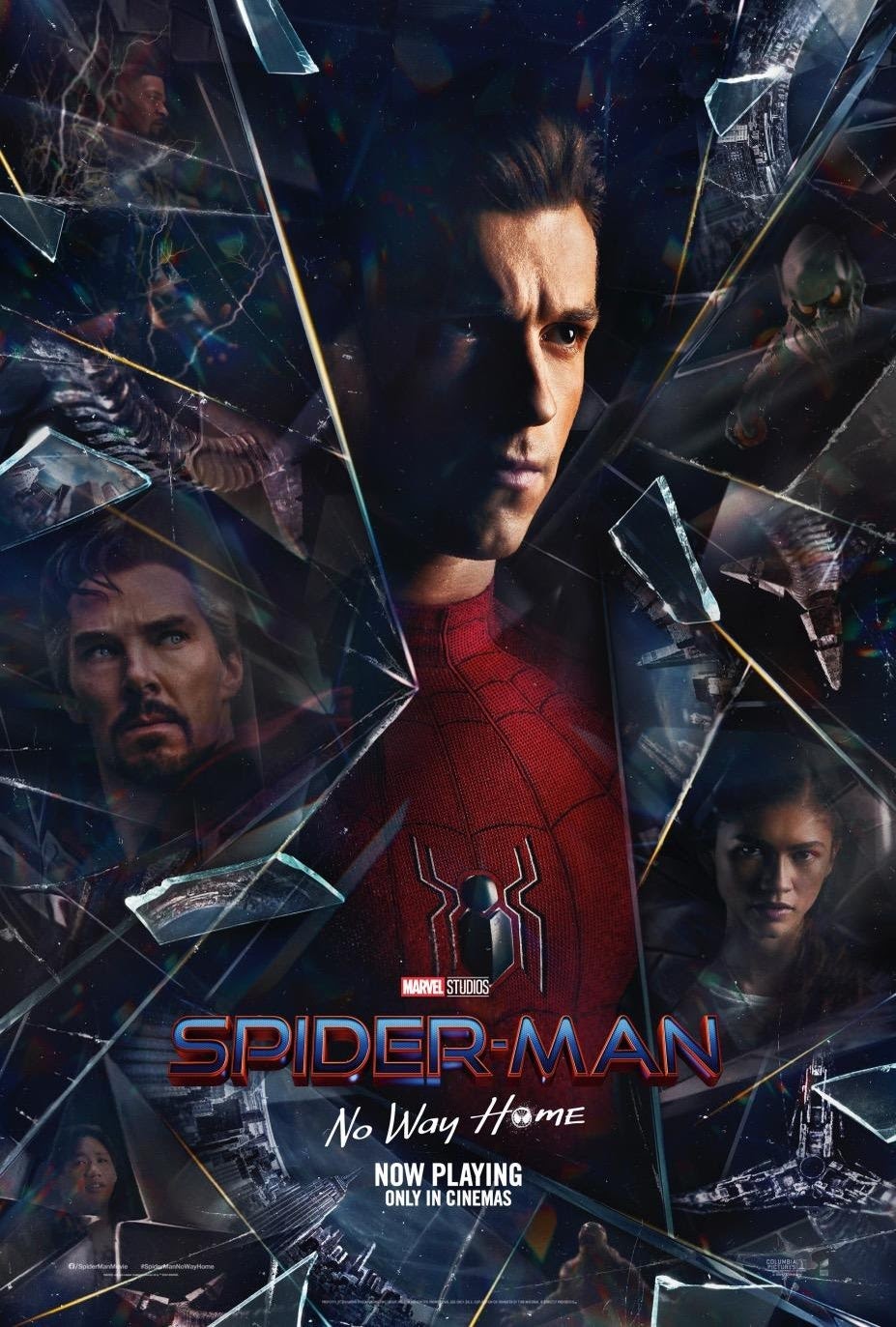 By DESTINY RAMOS and EMMIT MURPHY

One of the six official marketing posters for Spider-man: No Way Home that was released after the movie’s debut. (Credit to Marvel Studios)

The highly anticipated “Spider-Man: No Way Home” was released on Dec. 18, 2021, exceeding fan expectations by a landslide with all hopes, speculations and theories coming true. As of Jan. 21, 2022, “No Way Home” has made $707 million, just a little over a month of being in theaters.

The movie begins where “Spider-Man: Far From Home” left off with Spider-Man’s identity being revealed by J. Jonah Jameson (J.K. Simmons) of the Daily Bugle and the chaos that followed. Spectators see what happens with the now known Peter Parker (Tom Holland) and the trouble Mysterio (Jake Gyllenhaal) left after his passing. Not only is Parker’s identity on every news outlet in the city, but all the chaos interfered with his personal life and education as a high school student, with reporters on the outskirts of his home and school, and the students and staff watching his every move.

“If you were to see Daredevil in upcoming things, Charlie Cox, yes, would be the actor playing Daredevil. Where we see that, how we see that, when we see that, remains to be seen,” Feige stated.

With Murdock’s appearance, the famous line fans adored so much came. As Parker was speaking to Murdock, a protester outside of Parker’s apartment had thrown a brick into the window which Murdock caught with his left hand having senses similar to Parker’s. With Murdock having caught the brick, Parker asked how he was able to catch it, to which Murdock replied with, “I’m a really good lawyer.” Fans absolutely adored this line and have created many jokes and memes associated with it.

Initially, Parker had trouble with his identity being revealed from paparazzi at his school to people vandalizing his suit but was ready to accept the consequences until his girlfriend MJ (Zendaya) and best friend Ned (Jacob Batalon) were prevented from getting into the Massachusetts Institute of Technology because of his actions. Parker immediately attempts to fix everything for his friends. This entire segment of the movie, and the movie as a whole, accurately depicts Peter Parker’s selflessness by showing how he would do anything for anyone he cares about other than himself.

After his revelation, Parker goes to Dr. Stephen Strange (Benedict Cumberbatch) in hope of Strange’s help to have all citizens of New York forget the identity of Spider-man. Strange, having lost his title of “Sorcerer Supreme” due to the 2018 blip shown in “Avengers: Infinity War,” refuses Parker at first, thinking there wasn’t anything he could do to help without his title, and knowing that Wong (Benedict Wong) would not help him.

Before Parker is able to leave, Strange then remembers another way he can help without the title of ‘Sorcerer Supreme.’ He then leads Parker into a basement, later revealed to be Strange’s crypt, where Strange begins a spell involving an ancient mystical device known as the Machina de Kadavus. The relic would be able to perform a memory wiping spell, so that everyone, including Parker’s loved ones, would forget who Peter Parker is. This does not sit well with Parker and asks Strange to have it so that certain people could remember who he was. Strange does, rewriting the spell time after time as Peter lists all the people he would like to remember him as Spider-Man. The spell was rewritten a total of six times before backfiring and unknowingly opening the multiverse.

2 thoughts on “Part 1 of 3: Marvel takes first step into multiverse with “Spider-Man: No Way Home””