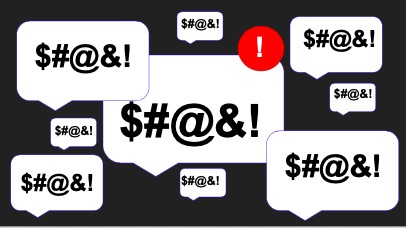 The internet has a new favorite term: “cancel culture.” Whatever connotation this term is used with, it is inescapable. All across social media, we see celebrities, historical figures and even ordinary people get “cancelled” for actions deemed offensive or inappropriate.

Users flood comment sections and direct messages to persuade or harass those affiliated with the cancelled person in order to cut all ties and join them in the rampage. Those who participate in cancelling often claim that it is to hold people accountable and spread awareness on certain issues. However, are these goals actually accomplished?

Here’s how the “cancellation” process usually goes. Our cancelled person will be named Bill.

It is important to hold people accountable for their actions both online and in the real world, but does this prevent them from making the same mistakes? The answer is simple: it just doesn’t give them the chance to make amends.

During an interview about youth activism at the Obama Foundation summit, former president Barack Obama expressed his own distaste of cancel culture. “That’s not activism. That’s not bringing about change,” he said, “If all you’re doing is casting stones, you’re probably not going to get that far. That’s easy to do.”

Cancelling someone, especially a celebrity, often does not end with the apology. After “Glee” star Lea Michele tweeted a statement in support of the Black Lives Matter movement, former co-star Samatha Marie Ware accused her of being racist herself, making life on set “a living hell” in a tweet in response (see image below). What followed was a barrage of comments, memes, articles and tweets attacking Michele, with many deeming her a racist. HelloFresh, a company affiliated with Michele, released a statement condemning her actions and announcing the termination of the partnership. She later apologized for her actions on set and deleted her Twitter account afterwards.

Photo of the tweet shows Samantha Marie Ware accusing Lea Michele of being racist. What happens after include a plethora of comments attacking Michele, showing just how devastating the effects of canceling someone can be (Screenshot provided by Tatum Mapes / Ethic Photo).

If she apologized, why did Michele feel it necessary to delete her Twitter account? The simple answer is that she didn’t feel safe on the platform anymore. After her apology, the cancelling did not stop. Every tweet had comment sections full of faceless users calling her a racist and continued to be tagged in negative memes and posts about something she had previously apologized for. The only way for her to stop the online harassment was by leaving the site altogether. It seems as though people did not care that she apologized and merely wanted to be angry or draw attention.

The consequences of cancel culture are different for celebrities compared to people far from the limelight. Celebrities usually get back to work after varying amounts of time. Internet influencers such as James Charles and Trisha Paytas continue to make tremendous amounts of money and influence millions of people.

What is the effect of cancelling a non-celebrity? Without the privileges of a celebrity, being cancelled as an ordinary person can be devastating. College admissions can be revoked, jobs can be lost or may not be found for a very long time due to the backlash against the person. If word spreads of your cancellation to prospective friends or partners, the relationship may end before it is started. Essentially, a single mistake can ruin someone’s life.

Despite the constant complaints, cancel culture is not going anywhere. However, it is not entirely a bad thing. If someone posts something offensive, they can be informed of their mistake and do better. Celebrities have to at least try to be decent people as social media platforms become more accepting and knowledgeable. More and more, hate groups are beng exposed and booted from apps such as Twitter, Instagram and Facebook, so that they can  never encourage violence online again.

On the other hand, cancel culture can create division and anger. There is a line between holding someone accountable online and cyberbullying–a line that is too often crossed.

If you are about to “cancel” someone, as yourself these questions:

This is a straightforward question. Evaluate whether or not the action is actually harmful. Look for the response(s) of the group or person, as there is a difference between the wrong opinion and a different opinion. This is to protect people who have been or could be harmed. Ultimately, it is not an excuse to argue with someone you disagree with.

Think about why you are sharing this information. Is it to protect the people who have been harmed or for you to attack someone? An example of the former is directing viewers to resources meant to better their understanding. An example of the latter is sharing anything with the sole intention of humiliating someone, whether it be a meme or pure insults. These do not help anyone; insulting, doxing, and threatening, no matter how well meaning you may be, is a form of cyberbullying.

This is probably the most vague of these questions, but it might be the most insightful. Evaluate whether or not the actions you take will contribute to an important conversation or just a short trend. Will you look back on what you did and be happy with how you handled the situation? Will it even be important in a year? Essentially, decide whether or not it will be worth it.

While cancel culture can be a force for good, it is too often utilized to humiliate and shame rather than to educate and inform. Before you cancel someone, please ponder your reasons for doing so. The best option is often not to cancel at all and simply inform the person of their mistake and move on.

It is also important to acknowledge that people have the ability to change. You were not the same person you were a year ago and will be a different person by the next year, as will everyone else. People can learn from their mistakes and do better, so give them a chance to do so. Bryan Stephense, author of the novel Just Mercy, said “Each of us is more than the worst thing we’ve ever done.”

Featured Photo: Social media allows for faceless acts such as canceling and cyberbullying to occur without much penalty. It’s important to remember the golden rule: “do unto others as you would have them do unto you” (Kite Media, Image made by Tatum Mapes / Ethic Photo).