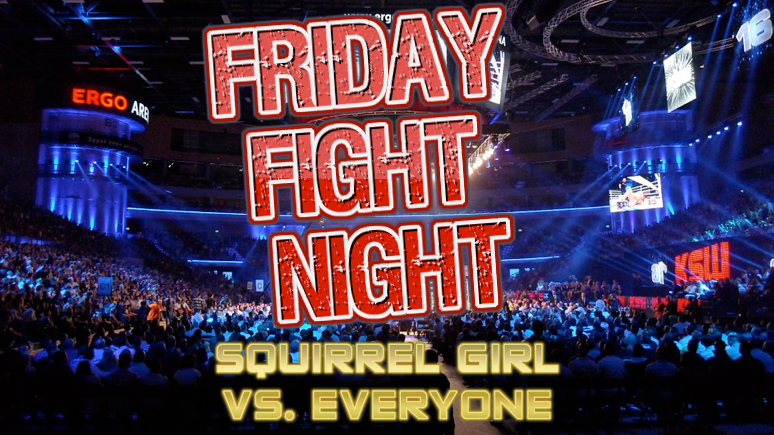 Note: All appearances and mentions in the comics and film works will be the primary reference material for this character, as well as other characters that are observed.

“Squirrel Girl.” The name says it all. This wacky-but-amiable gag character is identified as a mutant and is considered one of the strongest beings in the Marvel Universe. Despite that, she lacks heat-vision, planet-destroying energy blasts, a golden lasso, a silver surfboard or everything an overpowered character should have.

Regardless, Squirrel Girl has the enhanced powers of an everyday squirrel. She has superhuman strength, agility and senses, as well as the power to command squirrels. In the Marvel Comics, she is known as the “Unbeatable Squirrel Girl” because of her impressive feats.

Though her name is enough to make people question whether Marvel’s superhero name generator is busted, Squirrel Girl possess a severe potential threat that should not be overlooked should she become evil. Based on Marvel power-levels, she is an Omega Level mutant, which makes her one of the most powerful beings on Earth alone.

Moreover, Squirrel Girl has defeated Thanos, Galactus and Doctor Doom. Yes, no typos here. She has successfully defeated three of Marvel’s worst villains all on her own. The Mad Titan who once held all six infinity stones, the Devourer of Worlds who can grow beyond the size of a solar system and the Infamous Iron Man who can destroy a person from the inside out, all trounced by Squirrel Girl.

Squirrel Girl and her squirrel partner, Tippy-Toe (left), end the day with a job well done. This shocking page is seen in Marvel’s GLX-MAS #1 issue in 2005 (Photo by Comic Book Resources).

As a joke, many comic book readers have pondered the possibility of characters outside of the Marvel Universe standing a chance against Squirrel Girl, who is only in her 20’s.

Dr. Doom is overwhelmed and ultimately defeated by squirrels sent by Squirrel Girl. This was seen in Marvel’s Super-Heroes Volume Two, Issue Eight in 1992 (Photo provided by Superhero Database).

Note: This list will include characters across all of fiction that could potentially defeat Squirrel Girl.

Johnny Storm can ignite his entire body with flames, as well as engage in flight and fire manipulation. According to the Marvel Directory, the Human Torch has a default temperature of 780 degrees Fahrenheit, and can “generate much higher levels and flames about himself.” With this advantage, Squirrel Girl wouldn’t be able to send her army of squirrels to overwhelm him as she usually does to defeat her opponents.

The squirrels never bothered her anyway. There are many instances in Disney’s “Frozen” where Elsa demonstrates the full extent of her powers. Apart from freezing the water that surrounds the Kingdom of Arendelle (and most likely an even larger area), it is evident that Elsa can freeze anyone and anything that tries to attack her, which could include a wave of bloodthirsty squirrels.

Mewtwo is a physic-type pokémon who first appeared in “Pokémon: The First Movie.” With telekinetic and telepathic abilities, Mewtwo is considered one of the strongest pokémon ever. Mewtwo has the ability to manipulate and command any living thing. He could change the outcome of the battle and have Squirrel Girl meet the same fate as Doctor Doom by commanding the squirrels to attack her instead.

Having trained under Luke Skywalker and Supreme Leader Snoke, Kylo Ren is a prodigy in the ways of the Force. The first few moments of “Star Wars: The Force Awakens” shows Kylo Ren stopping a blaster shot in midair using the Force. This ability is not only limited to objects, which means Kylo Ren can freeze any living thing (or things) in its tracks with enough concentration. Stopping an army of squirrels would be nothing for the young apprentice.

With the power of Strombreaker at his command, Thor has many ways to defeat Squirrel Girl. He can engulf himself in electricity and cause shock-waves, much like the Human Torch when he activates his abilities. On top of that, Thor has the ability to fly when he is wielding either Stormbreaker or Mjolnir, giving him a potential advantage over the large number of squirrels at Squirrel Girl’s disposal. Thor has enough knowledge and ability to be victorious against the “Girl of Squirrels,” as he would say.

Now that some statistics have been given, the question is yet to be answered: Who would win against Squirrel Girl and her army of squirrels? Which characters would face defeat? One thing is for certain: Squirrel Girl will continue to defeat major villains (and heroes) whenever she pleases as well as defying all logic with her overpowered feats and abilities.