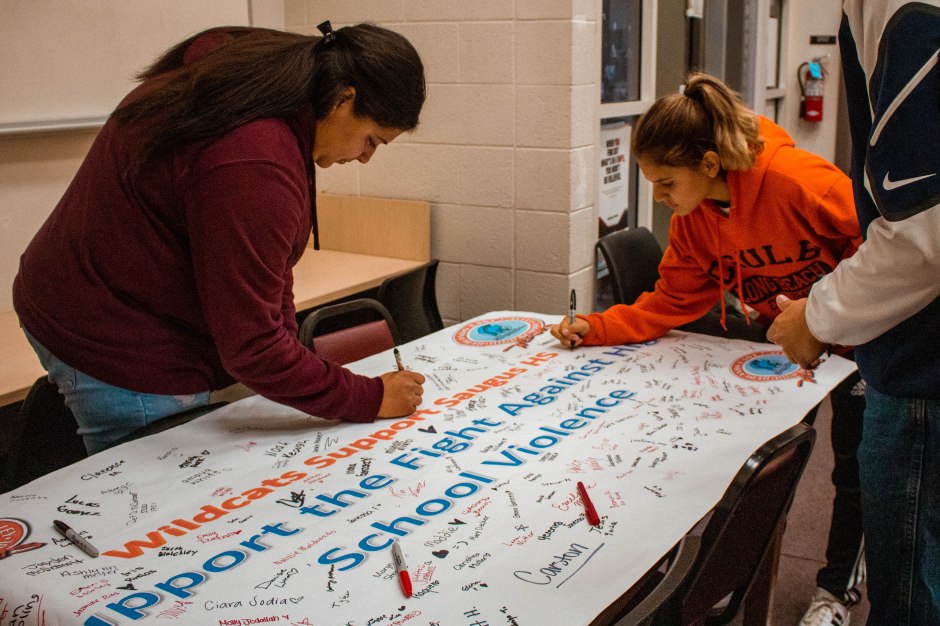 By RICARDO RAMOS and JOSEPH QUESADA

Vincent recounted her 10 years of employment as a substitute teacher at Saugus High School. Vincent not only has ties to the school and community through previous employment, but she also has a strong friendship with Saugus High’s current principal and many of its staff members.

Vincent stated, “This tragedy was very personal to me. I grew up in the community and worked at [Saugus] for nearly a decade. I actually knew the current principal, Vince Ferry, very well and babysat his kids when they were younger.”

Vincent explained that her friend, Detective Daniel Finn, was one of the first responders on the scene that day. Finn, who was off duty at the time of the attack, was dropping off his son at Saugus High School when he saw hundreds of students fleeing the campus in a panic.

“Finn ran straight into the danger, with no bulletproof vest or weapon of his own; he assessed the situation and began applying first aid to students after the threat was eliminated” Vincent said.

According to the Los Angeles County Sheriff’s Department, the alleged attacker was a 16-year-old Asian male who wore all black and shot two teenage students, who later died at a hospital, and left several victims injured.

“I was so shocked because of how close and tight knit the community is. You just don’t expect things like this to happen, especially not in an environment you know so well,” said Vincent.

Liam Mapes, junior at Redlands East Valley, signs his name on the poster for Saugus High School in the REV security office on Nov. 19, 2019. “It was something small that we at REV could do for Saugus,” Mapes said. (Alyssa Ornelas / Ethic Photo)

One of the teens killed was a Reserve Officers’ Training Corps (ROTC) cadet and the other was a well-rounded cheerleader, according to Los Angeles Daily News. The Los Angeles Sheriff’s Department supplied the public with announcements through their Twitter account and various news services.

Students of Saugus High School told KTLA that they had heard gunshots while walking to school, causing them to go to a park nearby the school to call their parents and alert authorities.

Saugus High School will remain closed until Dec. 2 and the other schools in the William S. Hart Union District reopened on Monday, Nov. 18, according to Deputy Superintendent Mike Kuhlman. The Los Angeles County Sheriff’s Department is trying to track down more threats to schools by investigating numerous online threats that were later deemed non-credible.

Thousands came to honor the victims of the Santa Clarita shooting at a vigil that was held by the city in a local Santa Clarita park on Nov. 17 to mourn and remember the lives that were lost.

The parents of both deceased teenagers attended to mourn with the thousands of friends and community members, according to the LA Times. Santa Clarita’s Central Park became a place for all to pay tribute and remember the victims by leaving balloons, candles, flowers and stuffed animals, all in the school colors.