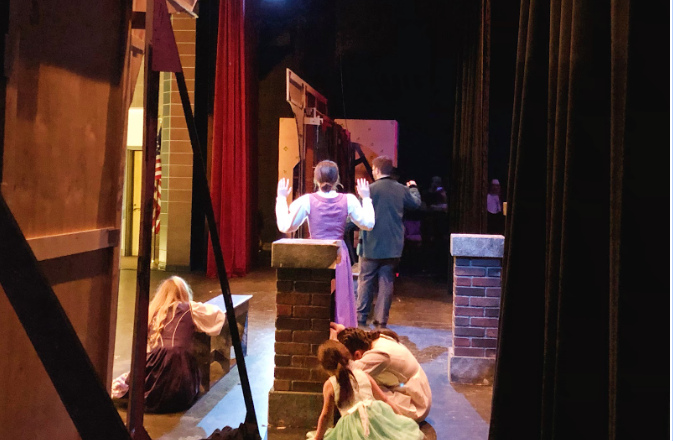 From its first note to its very last, “The Sound of Music” has become a childhood favorite of many in the United States, and this year Redlands East Valley High School’s very own performing arts worked together to produce their own production of the lovable musical. From Jan. 7 to Mar. 10, every cast member put their hearts into singing and acting, while every technician joined hands to assemble an intricate set.

As a student technician director myself, I watched everyone come day after day to make the show a grand one. Because this was my last ever show along with our director’s, Kathy Johnson, the pressure was immense more so than ever before. Before I knew it, January was over, and we still did not have the wood needed to build our set.

This set was made out of two false prosceniums, and the Blackstone Theater has a proscenium spanning the width of the stage above it like an arch. These false prosceniums set the stage back to make room for different backdrops and had to be about 10 feet tall, so one can only imagine the amount of wood and time we needed to assemble just the main part.

Come February, I was coming in to build every day, which was more than I was ever mandated to do. Day after day, wood had to be stapled, drilled or cut. Right before my eyes, the set was coming together little by little, and the actors were completing the play scene by scene. Two false prosceniums complete with four interchangeable flats of different sceneries, three movable platforms that made up the Von Trapp villa and other furniture pieces completed what might have become my favorite set to build.

Come March, we were ready to start show conditions. For non-thespians, show condition is a term we use to describe a 1-2 week period of time where we practice for the show. This means stage makeup and costumes are on, props are being used, sets are coming on and off, lines are read from start to finish and live music is being played. If it sounds stressful, that is because it is.

Everyone is running around, trying to figure everything out. Shouts of “Where is that prop?!” and “Oh no, we have to make the programs!” can be heard from the director; and unintentionally harsh words are sent under the pressure. Then, it sneaks up on everyone: opening night.

In the classroom, everyone is taking deep breaths, some are laughing nervously, but all are holding hands. Before every show, our performing arts have a special routine called passing the energy. Every person crosses their arms, right over left, and holds the hands of the person next to them. The circle is complete, and Johnson picks the person to start.

It is silent, and once I close my eyes, I can see the energy start. It begins to flow through every person by a squeeze from someone else’s hand. It whooshes and passes through each and every person until it gets back to the first person who says, “Break a leg!” An exclamation of “Whooo!” is heard as everyone turns, and the show commences.

Every night is a new audience, and every audience experiences a different show; however, no matter the night, no matter the person, every actor has a chance to touch their hearts and make their character come to life, every technician a chance to set the scene and tell the story.

That is precisely why I come back to every show. Besides all the friends and memories I make along the way, nothing could change the feeling of letting the set say everything, and for my very last show, the hills really did become alive.

One Reply to “The hills became alive at the Blackstone Theater”