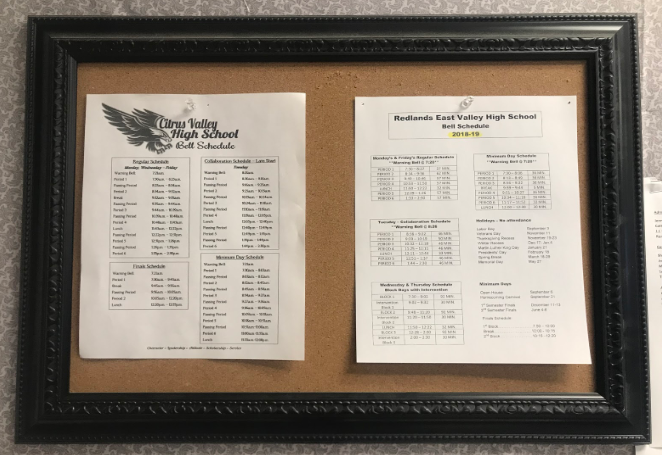 With US News recording more than 20,500 public high schools in the United States, it’s no wonder that there are various ways to schedule the average school day. However, matters become complicated when other factors, such as graduation credit requirements, electives, and AP courses, begin to draw the line between the classes students want to take and the classes that their schedules allow them to take. These common issues have challenged guidance counselors across the country every school year, resulting in school schedules being constantly in flux or under revision in the hopes of maximizing the time of the students and staff alike.

From the perspective of a newcomer not yet fully accustomed to all the idiosyncrasies of the Redlands Unified School District system, there are major changes that need to be made to the Redlands East Valley High School scheduling system. More specifically, there needs to be a shift to 4×4 or A/B Day schedule. High schools within the RUSD would benefit enormously from switching to this schedule as it will open up students’ schedules, reduce the need for summer school, increase teachers’ planning time and encourage creative ways to educate.

Currently, REV is following a version of the block schedule, with Monday and Friday consisting of six classes and late-start day on Tuesday. On Wednesday, students experience periods one, three and five for two-hour blocks; on Thursday, students attend periods two, four and six in a similar fashion. On these block days, students with a C or higher and the teacher’s permission may leave at the end of a block period for “intervention,” a thirty-minute break at the end of class.

Meanwhile, the 4×4 or A/B Day schedule consists of a total of eight classes divided over two days. The “A-Day” is the first day of the rotation and includes four of the students’ classes with an hour break in the middle of the day that is then divided into two thirty-minute periods—one for eating and the other for meeting with teachers, socializing or participating in club activities. This lunch plan allows for fewer people to occupy the eating spaces on campus during lunch, thus giving more students an opportunity to sit and eat comfortably rather than balance on ledges or staircases. The group of students not eating will be assigned to a classroom that changes throughout the year which will give them a “unit-lunch” and a chance to catch up on homework or meet for extracurriculars without having to give up their lunch. The “B-day” rotation would entail the same routine except with the four other classes in a student’s schedule and the unit-lunch block occurring after the second class.

Although this idea may seem unnatural or inconvenient during the initial stages, it will ultimately serve to benefit the students and the school’s staff. The most important improvement that will be made is that students will be able to fit more classes in the year, reducing the need for summer school. In the absence of summer school, students are able to truly take a break and prepare for the year ahead without the stress of cramming a whole year’s worth of learning into a few weeks.

This new approach to the normal school day evidently will allow for longer classes. From a 57 minute class to an 84-minute class, this additional time enables students to fully immerse themselves in that specific class or subject. According to the National Education Association, the 4×4 scheduling allows “students [to] have more time for reflection and less information to process over the course of a school day” and “with the increased span of teaching time, longer cooperative learning activities can be completed in one class period.” Moreover, the American Association of School Administrators has asserted that “consistent evidence shows that students’ grades improve and the number of students on the honor roll increases” when the 4×4 schedule is implemented in a school.

In a survey done among REV and Citrus Valley High School students regarding their opinion on making the switch to this type, the students expressed mixed opinions. Although the majority of students, about 61.1%, said that they would vote in favor of this school day, the other 38.9% of students disagreed and brought up valid concerns. Maggie Snavely, a freshman at Citrus Valley, argued that “if a student takes several AP courses, they may still be overwhelmed with commitments and overlapping test dates, which would not allow for effective studying or being able to retain the information presented.”  Mia Delmonico, a junior at REVHS, expressed she does not believe that this schedule would work for her school. She believes that “many students do not need to be in class for an eighty minute period to fully engage in their learning environment,” adding that the extended class periods would be counterproductive as many feel that it is already difficult to stay focused with current class times. Delmonico also raises pressing concerns about the currently attending students. She points out that “most students already exceed the number of credits needed without even taking six classes a semester.”

Although these concerns are valid, there are ready solutions to most of them. Firstly, not all eight classes would have to be AP or honors level courses. There are a variety of electives that could be taken by current students, who have tried to jam as many AP courses into their schedules by taking summer courses and not concerning themselves with non-weighted classes that could lower their GPA. These open blocks in their schedules could be filled with life-skills classes, such as culinary, home EC or other courses that could really better prepare students for independent living and adult life.

For many students, grades control every aspect of their lives, and a switch to an A/B Day schedule might make some take classes that are not weighted, which would consequently lower their GPA. For a substantial number of students at REV and Citrus Valley, this could become a major concern. However, there is a possible solution to this weighted issue: limit the number of AP courses that can be taken in one school year. This limit could be placed reasonably, such as at six. A maximum of six AP classes in a schedule means that future students can take just as many AP’s as currently enrolled students, and an even playing field for GPAs can be reached. Then, with those two other open schedule slots, students may take life-skills classes or electives of their choice. To address the students who still feel that six AP classes are not enough, there still are programs, such as dual-enrollment, offered at nearby universities and community colleges. Thus, the shift to an A/B Day schedule can be modified to maintain students’ GPAs while still giving them the opportunity to pursue other interests or take even more rigorous courses should they wish to do so.

In a few years, after the current students that have attended the school prior to the schedule shift have graduated, the issue of students have already completed their required credits will no longer exist. The new generations of students will receive a more balanced high school experience as they will finally have enough space in their schedules to take courses that encourage diverse, unconventional student interests and talents such as the arts, videography classes or creative writing. Furthermore, this scheduling could also be utilized for preparatory classes for the PSAT, SAT, ACT and all those other dreaded acronyms. In all, this new schedule will not overwhelm students with unbearable workloads or leave current classes with dead time as it may be initially perceived. On the contrary, it may just do the exact opposite.

Longer periods allow classes to be far more interactive as teachers will be given more time to work on creating engaging lesson plans that effectively convey curriculum material. In a New York Times article, Debra Nussbaum speaks with several principals from across the country and discovers that they have similar opinions on the implementation of longer classes. These principals all expressed hope that ”this schedule can empower teachers to do certain things that you cannot do in forty-three minutes” and ”it empowers teachers to be more innovative and creative.”

Although changing up an old routine can be stressful for everyone at first, no progress can ever be made if we allow ourselves to stagnate. A shift in the school day schedule at the high schools of the Redlands Unified School District could be the catalyst needed to improve the quality of education for both current students and the many graduating classes to come.