Christian Morrison is the co-editor in chief of Ethic News

Imagine this: you just got done swimming at your local public pool, but when you went to get out you find that your sandals are missing.  You have just been robbed!  This was a common occurrence for many Romans living throughout the empire.  However, where you might call the police to report the crime that just occurred, a Roman citizen would have no type of law enforcement to turn to.  Although law enforcement did exist in the Roman Empire, it was almost exclusively for the wealthy and powerful and mainly ignored lower class citizens affected by crime.  So what was a Roman to do?

Naturally, that citizen would turn to their patron.  In Roman society, those in the upper classes, such as the equestrian or senatorial classes, would hire people from the lower classes to perform jobs for them, such as attending political events with them, witnessing the signing of business documents, and following them through the forum.  In return, the patron would provide food and money to their followers.  A patron would be obliged to help out their clients and would aid them in seeking justice.

However, not every Roman had a patron.  Without their backing, a Roman was left quite helpless in seeking retribution for any wrongdoing committed against them.  Instead of giving up their pursuit for vengeance, they would turn to the immortal gods for aid.  To do this, they reached out to the gods through lead tablets on which they would write their message.

They would typically start off by calling upon one of the gods to help them receive justice.  Then they would offer the god something, such as money or other material items, in return for their aid.  In some cases, the curse-maker would offer the health of the person who wronged them to the god.

Often they would beseech the god to take away the mental capacities of the criminal and cause great physical suffering until they decided to return what they stole.  In rare instances, a picture representing something in the message would be drawn. In one such picture, Charon, the ferryman of the underworld, was drawn upon his vessel.  After writing the message out, the Roman would roll up the message and place it in a place associated with the gods.  For example, in Bath, Britain many curse tablets were found in a pool dedicated to the god Sulis Minerva. 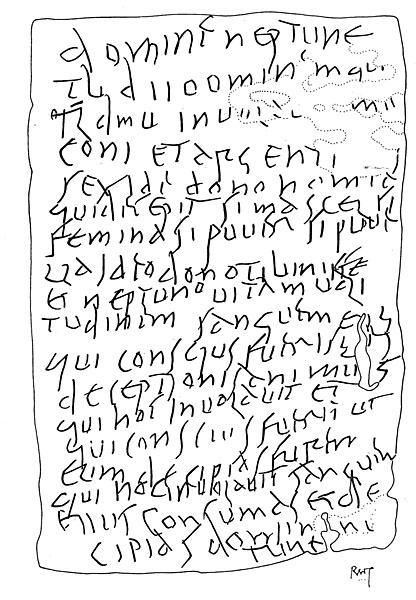 A drawing of a Roman curse tablet from curses.csad.ox.ac.uk

The illustration is an example of what a Roman curse tablet would look like.  According to a translation provided by Oxford, it reads, “Lord Neptune, I give you the man who has stolen the solidus and six argentioli of Muconius. So I give the names who took them away, whether male or female, whether boy or girl. So I give you, Niskus, and to Neptune the life, health, blood of him who has been privy to that taking-away. The mind which stole this and which has been privy to it, may you take it away. The thief who stole this, may you consume his blood and take it away, Lord Neptune.”

These tablets provide a key insight into the relationship shared between everyday Romans and their gods.  Based on the tablets’ inscriptions, many Romans viewed their relationship with the gods to be a business one.  In exchange for their help, they would give the god something that they valued.  The discovery of these tablets has been of great importance to the study of Greco-Roman culture as a whole and continues to provide important cultural information to this day as more are found.