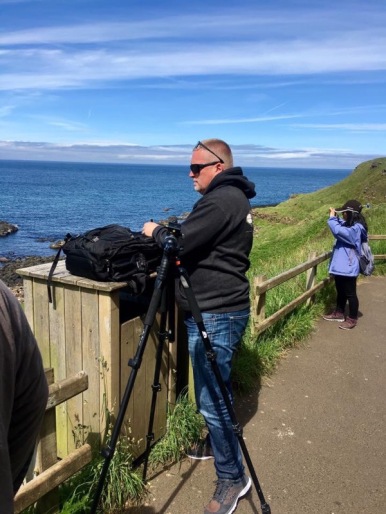 Ronald Kroetz sets up his camera on the coast of Ireland during a family trip. Kroetz is an avid traveler and photographer. (Photo courtesy of Cameron Kroetz)

“Dedicated, fun, and loving” are all words that describe an accomplished man that has begun a new career path at Redlands East Valley High School.

Ronald Kroetz, new assistant principal at Redlands East Valley High School, has had a successful career leading up to this point of being an administrator. He graduated college with a Bachelor’s degree in mass communications but did not seem to know what career pathway he wanted to pursue.

With interests in media, news and television, Kroetz took a job as a TV news photographer for ABC News in Palm Springs, California. He maintained his position, earning 15,000 dollars a year, for five years. By this time, Kroetz had two kids and realized he needed a better paying job.

Because he did not want his family to move to a market-city, such as Las Vegas or Phoenix, Kroetz decided to interview for a teaching position at Palm Springs High School. Soon after, he was hired as the new video production teacher but had had no experience teaching. He describes his experience by saying, “I pretty much started out of the blue. I walked into class my first day and I had never subbed a day, student taught,interned, nothing.” With this in mind, he was determined to succeed, though his first thought was “Hello high school children. What do I do?” This is understandable for a “26 or 27 year old” in a situation like this one.

Unfortunately, Kroetz, along with 180 other education employees in his district, was laid off due to education budget cuts across California. After this, he was hired at Corona High School as a career technology teacher. After about 7 years of teaching on a middle school campus, he decided that he wanted to pursue a career as an administrator. He has now been an assistant principal for nine years, with this being his first year at REV.

Kroetz notes the movement in the wave in this photo taken in Hawaii and posted on his photography website. (Ronald Kroetz photo)

In addition to his administration work, Kroetz has expressed great interest in multimedia and photography. He has participated in photography classes in college and continues his passion through his own website.

On this site, he features photos in which he likes to focus on different landscapes with vibrant colors. To make the colors pop to the fullest extent, he often uses Adobe Lightroom to enhance his work. He chooses not to include people in his shots and also prefers to work alone so that he does not “feel pressured or like he’s taking too long.” In addition, he includes his own captions with his pictures, but occasionally uses quotes from other people.

Photo taken by Ronald Kroetz in Montana. Kroetz explained that he does not intend for photos to necessarily reflect exact reality, but enjoys enhancing color and lighting. (Ronald Kroetz photo)

Kroetz has now been at Redlands East Valley High School since May of the 2017-2018 school year. Throughout this time he has excelled in his career as assistant principal and has begun to leave his impact on the school and its community. He is described by counselors Joe Gianni and Mollee O’day and counseling secretary Julia Smith as a “charismatic, friendly, and outgoing” individual.