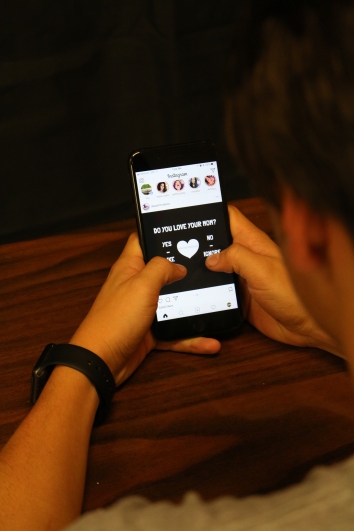 Many scientist and experts may argue today’s current communication system is wholly advanced compared to only 30 years ago. Yes, they are surely correct in several ways. Yet, in the present, it seems the only method to speak to another is through a screen. Human interaction is aloof. However remote as humans have become, will future generations ever truly be able to live in a society with such chaotic media intake?

In no way to sugarcoat the increasingly imperative issue, countless people today would rather stay inside their household and either watch TV, search the web or look on social media sites than go outdoors and have genuine social communication. According to Common Sense, an organization built upon the purpose of child development in the digital age, most parents and their teens spend as much as nine hours a day using the screens of electronics. Although social media such as Instagram, Facebook and Twitter was initially formed as means of connection to friends and family from lengthy distances, the opposite has actually happened. As recorded by the University of Pittsburgh in a study of young adult social media users, many reported often having the feeling of total social isolation, this being due to their large association with these media sites. Does this spike in loneliness conclude any sort of change to the ways of current culture?

Modern technology does offer a multitude of positives such as easy anonymity, constant access to endless abundance of material and no geographical limitations. Many real life obstacles and scenarios do not act as a barrier to gain necessary information.

Social media has also led many to establish mental and cognitive issues. An increasing problem within online communities is the frequent jealous comparison of other media users. In one study testing jealousy and other negative factors using Facebook, the authors of the study stated, “This magnitude of envy incidents taking place on Facebook alone is astounding, providing evidence that Facebook offers a breeding ground for invidious feelings.” This copious amount of constant flow of online communication can also contribute to cyber-bullying and “facebook depression.” The American Academy of Pediatrics has warned of these pressing dilemmas for young children and teens, yet this has also been linked as a issue with the adult community as well.

There is an abundance of evidence from past generations who have contemplated upon this futuristic problem. Classic books such as Brave New World by Aldous Huxley and Ready Player One by Ernest Cline have precise descriptions of what humanity may become without caution. Brave New World displays life where human value and custom have disappeared due to such an increased advance in technology. Have these prior time periods saw the future that we may be accustomed to today?

This increase in health problems must be in relation to progressing electronic use. Is this an indication that the overall entirety of consequences may outweigh the beneficial aspects of social media and the of knowledge we have due to the internet? This must not be a positive outcome for society’s well-being to be rather oblivious of the lives of our peers or to deal with the consistent stressors that one may not be as successful as another. This vicious cycle will likely continue for the future generations to come, era after era.

Should the making of a social media account be added to a stage in an adolescent’s childhood? A society that lives through a screen rather than traditional human connection does not seem unusual initially. However, it must be odd to find a room of youth in complete silence due to a completely distracting device.

One may find oneself overwhelmed and exhausted by such a fast-paced culture. Yet, the actual concept of limitless insight of every factor around your community, or considerably the world, is the ideal aim for the future of humanity, correct? As Arthur M. Schlesinger, an American historian, once said, “Science and Technology revolutionize our lives, but Memory, Tradition and Myth frame our Response.”