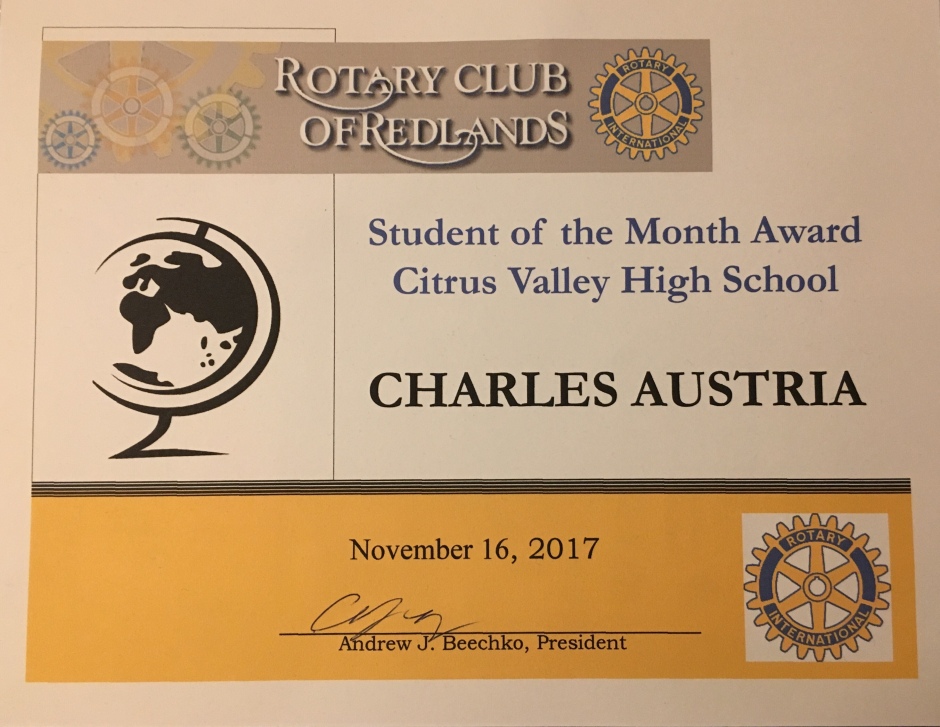 Charles Austria, senior at Citrus Valley High School, received the Rotary Student of the Month award on Nov. 16, 2017, for his great academic achievement and service to community. For those who are not familiar with Rotary, it is a global network with approximately 1.2 million members who promote humanitarian work around the world. Austria currently holds a 4.73 GPA and is taking 6 Advanced Placement classes such as AP Chemistry with the hopes of majoring in Biochemistry at UC San Diego and attending medical school to become a psychian and potentially specializing in neurology and oncology in the future.

When asked about how he felt about his accomplishment, he personally felt more “shocked” but proud of his accomplishment due to the support from teachers and his counselor at CVHS. He considered his determination and his mistakes as his strengths but also as his weaknesses. He “feared of failing” in his endeavors and mentioned that without his mistakes he would not have been able to grow. Through a summer program, he met a friend who helped change his pessimistic attitude and developed a more optimistic perspective. Ultimately, this was what helped him change and become motivated to perform better in school.

With a passion for Latin, he is the current president and co-founder of Classics Club and considers himself as the pioneer of AP Latin at Citrus Valley. As the class requires a lot of commitment, he travels to Redlands High School to discuss and review material with his teacher. During lunch, he occasionally tutors other students with the Peers Tutor program specializing in all levels of math and helps his fellow classmates in AP Chemistry. In his spare time, he likes to volunteer at Helping Hands food pantry on the weekends with friends. He also mentioned that it was important to him to establish a time to work and rest. He take advantage of his free time to finish his work in advance to help reduce the overwhelming amount of stress throughout the school week. Besides volunteering with friends, he also likes to play chess, read, take pictures and travel to help him relax from school.

He felt grateful for the award but was also humble about his achievements and mentioned without the support of friends and family he would not be able to achieve as much. He relies on his mistakes to become a better version of himself and his optimistic friends who contribute to his personality and encourage him to do his best.