The pros and cons for nuclear power

Since its introduction in 1957, nuclear power has proved a viable and safe source of energy and should continue implementation as shown by its ability to produce power with low-waste products with the exception of its core, the magnitude of which a paucity of reactive matter can generate power, and its standing of being clearly more reliable than other alternatives. In this less wasteful system, the longevity of the planet may be prolonged and the total health of the population more protected from pollutants.

Nuclear power is a way to produce energy with far fewer hazardous emissions than alternatives such as coal power, and therefore is less toxic to the environment. For example, to produce the same amount of electricity, a nuclear plant only emits three percent of the carbon dioxide, one of the chief factors of global warming,  that a coal plant would synthesize. This shows that the usage of nuclear energy may reduce one of the biggest problems generated by human utilization of the earth’s resources. This also illuminates the clear advantage created by using this power source as it proves healthier for the earth. Another example of a difference in pollutant amounts is shown when comparing the gross materials used by the two sources. According to study by the Union of Concerned Scientists, a typical coal plant produces approximately 318,000 tons of waste per year, which consists primarily of ash and sludge, whereas the typical nuclear plant produces only 20 tons of nuclear waste for about the same power. This shows that it is objectively far less wasteful than coal. 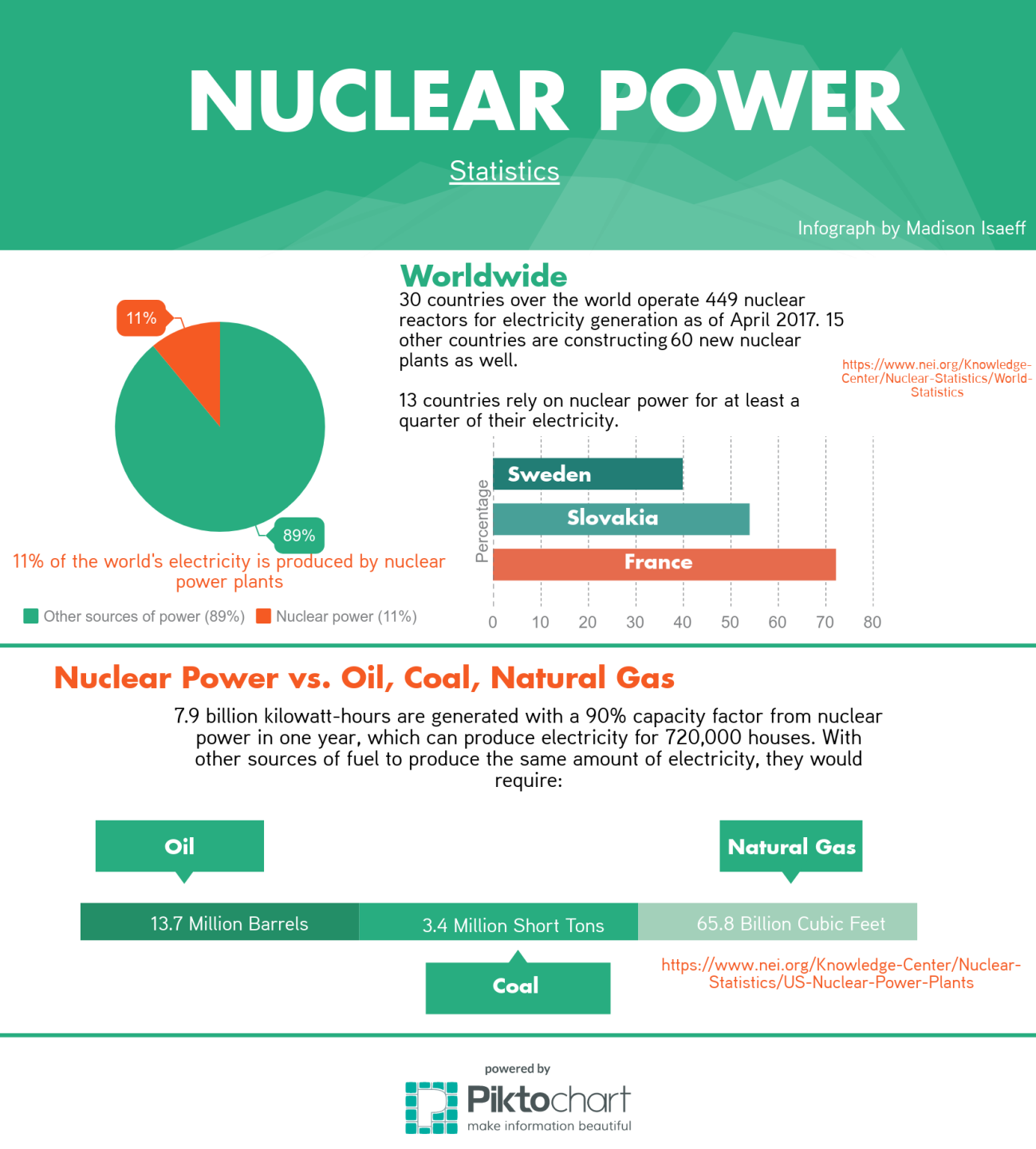 This does come with a grain of salt, being that nuclear waste is unnatural and takes time to return to safer levels, but due to landfills proving a major human health hazard, the difference in nearly 300 tons of waste is quite significant. Nuclear power is simply far less wasteful than the popular coal power source. Consider 300 tons a year less waste piling up in landfills that could be used as industrial or even suburban areas, which are in high demand due to the growing population.

However, nuclear reactors not only emit less waste products, but also requires less materials and are cost-effective to run. For example, the cost of maintaining a nuclear plant in 2017, averaged less than $125 per megawatt-hour. This price is a bit more than conventional coal at $100, but has a miniscule fuel cost, in only being beaten by wind, solar and hydroelectric power. This shows that the revenue from the plants are going more towards trained workers in a safe facility and not in a dark and dangerous mine on long, unhealthy treks to deliver large quantities of material. It is clearly better to support workers in environments where their collective health is not at risk, therefore the cost of the production is justified.

Finally, nuclear power is a very reliable energy source. The average nuclear plant may run 18 to 24 months nonstop before needing a brief refueling session. This means that the plant can produce consistent and large quantities of electric energy, with little downtime, meaning that the workers have a consistent source of income to support their families. Furthermore, it is the most reliable source in the aspect of it having a 92 percent ratio of actual energy produced versus maximum possible. This is 18 percent higher than the runner-up, geothermal energy, at 74 percent. This shows that nuclear plants have it right, blasting out the most bang for the buck, and not wasting as much used materials. Nuclear power is a dependable source of power for these reasons.

Essentially, nuclear power is clearly the superior energy source. The pros include its very little emissions and other waste products, and it is also highly cost and time-efficient to run a nuclear plant. The cons include that the technology is newer than coal, and therefore could be perfected, and it is already well known that any escaping nuclear radiation may put the health of workers and surrounding populations of humans and wildlife in danger, not to mention the notable time it takes for nuclear waste to decay to a safe level. Though there is risk in this technology, the benefits of the implementation of this power source are undeniable.