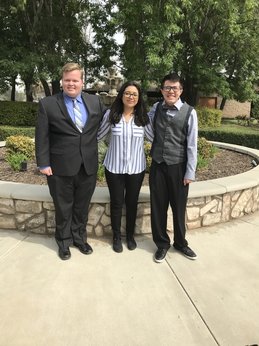 The second annual Advisory Panel was convened in Rancho Cucamonga with the goal of informing the County Superintendent of what students desire to see in their schools and communities. Over 100 students from all over the county participated in this panel; students were able to separate into groups of about four that specialized in a particular issue where they created a powerpoint to present to the Superintendent and other elected officials.

Dylan McGee was in a group that advocated for the creation of mental health programs in San Bernardino County schools while backing it with scientific evidence. Dylan McGee talked about how “not only does the Student Advisory Panel let you talk to elected officials to make a positive difference, it gives you free food. Free food is always good.”

The students were accompanied by Vanessa Fairbanks, Redlands East Valley teacher. She said, “The student advisory panel was a wonderful experience that allowed me to help students to work together on a topic that they are passionate about and to present it to elected officials and stakeholders. The REV students who participated did a fantastic job and were complimented on their superior performances by the panels, staff members, and fellow students. The REV students looked like rock stars!”

Maya Sanchez described her experience at the panel by saying,“the program was an eye opening experience because it allowed me to see things beyond Redlands. I met some really great people who shared the same passions and for that I’m really grateful.”

The Advisory Panel concluded on the Friday before Spring Break and was considered a great success by Superintendent Alejandre.