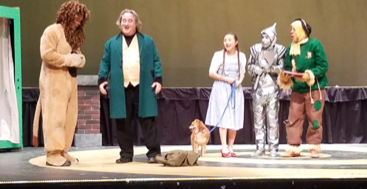 The set is up, the makeup is done, the lights are dimmed, and the orchestra tunes. The hearts of actors and musicians alike beat excitedly. The opening plays with wild fervor as each orchestra member is eager to showcase the culmination of endless practice over the last two months. Mr. Hollett commented on the opening by saying that “the kids worked so hard, and it was really wonderful for all their handwork to pay off. It was a really wonderful opening night.”

The spotlight opens on Dorothy, played by eleventh grader Taylor Gonzales, with Toto in hand. When interviewed about her feelings in that moment, she said, “I was extremely nervous right before we went on, but when I’m acting, all my anxiety goes away. [It’s] as if I’m not even acting but rather being.” Taylor showed the rapt audience that when you are somewhere over the rainbow, skies are blue and the dreams that you dare to dream really do come true.​

The spotlight shined just as brightly on the Wicked Witch of the West, played by twelfth grader Sydney Prybycien, who inspired fear in the not only the characters but also the audience with her all-too-convincing cackle. She breathed new life into an iconic role, making it her own and combining new elements of wickedness with the time-honored archetype of the witch. Her creative ways of entrapping Dorothy, Toto (Sunny), the Lion (Drew Vines), the Scarecrow (Gavin Antonio), and the Tin Man (Daniel Diaz) kept the audience guessing at every turn of the yellow brick road.
As the night went by, the incredibly cast of characters captured both the hearts and minds of the audience as they retold the classic tale of Oz in true Wildcat fashion. The audience was transported off to see the Wizard, played by Dr. Tom Slick, through the Merry Old Land of Oz, and fields of Poppies.
As the cast takes their first bows, a medley of Somewhere Over the Rainbow, Poppies, and the Jitterbug swell around them, bringing the night to an end on an exhilarated and excited note. If the first night is indicative of what the rest of the show’s performances will entail, there is no end to the amount of talent Redlands East Valley’s Wildcats have to offer.