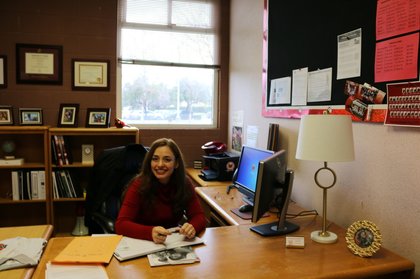 She feels she can contribute to Redlands East Valley in many ways. She hopes to connect with students on a level where they can gain a sense of family on the campus and continue their ways on the road to success.  These contributions are also a part of her role as an administrator in the school. Though she didn’t always know she wanted to be an administrator, she has taken on her new role with pride and determination.

Before coming to REV, Gill was an elementary school teacher and math coach. “I enjoyed being a leader for the kids and someone they could look up to,” she stated. She also mentioned that her favorite part of being at REV so far was walking through each classroom and seeing her former students be so successful. Gill later became a math coach to inform math teachers district-wide about the new Common Core standards that must be met in each classroom. When asked what the first thing she noticed about the school, Gill replied, “Everyone here was just so welcoming and friendly and they all went out of their way to make sure I felt accepted into the REV family.” She also mentioned that “compared to other schools, there was just this sense of family here, and I’m so glad that I can be a part of that.”

Overall REV is honored to receive a new addition to their family of staff and students alike. With a new administrator we are able to trust and rely on, REV looks to further its success in all aspects. Laraissa Gill now can contribute her experience to a new part in her career. She is able to continue to help kids and allow them to be the best that they can be.